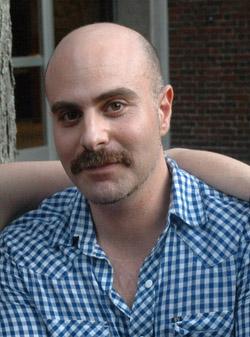 David Adjmi was called “virtuosic” by the New York Times and he was listed as one of the Top Ten in Culture for 2011 by The New Yorker magazine. His play Marie Antoinette received a critically acclaimed world premiere co-production with A.R.T. and Yale Rep. The play won 3 Connecticut Critics Circle Awards including Best Play.

3C received its world premiere at Rattlestick Playwrights Theater in June 2012, and was dubbed “the most divisive and controversial play of the season” by the New York Post. 3C was selected as one of the top ten plays of 2012 by the Post, Time Out New York and The Advocate.

Elective Affinities, which premiered at the Royal Shakespeare Company, received a U.S. premiere this December at Soho Rep starring Zoe Caldwell (Top 10 of the year in Time Out New York, New Yorker.)

Other plays include Stunning (LCT3/Lincoln Center Theater, Woolly Mammoth Theatre Company), The Evildoers (Sundance, Yale Repertory Theatre), Caligula (Soho Rep Studio Series), and Strange Attractors (Empty Space).  David was awarded a Mellon Foundation Playwrights Residency, the Guggenheim Fellowship, the Whiting Writers’ Award, the Kesselring Prize for Drama, the Steinberg Playwright Award (the “Mimi”), and the Bush Artists Fellowship, among others. He is the recipient of multiple MacDowell Colony fellowships, Sundance/Ucross residency and others. He currently holds commissions from Lincoln Center Theater, Yale Rep, Berkeley Rep and the Royal Court, and he is the recipient of the 2012 Fadiman Award from Center Theatre Group.

He has served on panels for the Luminato Festival, National Endowment for the Arts, the McKnight Foundation, Massachusetts Cultural Council and others. He has taught workshops and seminars at the Iowa Playwrights Workshop, Harvard University, Yale School of Drama, Primary Stages, NYU, Mark Taper Forum, CalArts, Southampton Writers Conference, and the University of Rochester. He is a member of New Dramatists, the Dramatists Guild, MCC Theater Playwrights’ Coalition, and Soho Theatre’s “The Hub.”

A collection of David’s work, Stunning and Other Plays, is published by TCG, and his work is included in The Methuen Drama Book of New American Plays. David’s memoir, An Insignificant Man, is forthcoming from HarperCollins, and a second play collection from TCG will be published in spring 2014.