Tag a Loved One

Braxton Crewell is the 2017-18 Artistic Development Intern at Trinity Rep. This blog post is a look into his work behind-the-scenes.

How do you engage an audience before they witness such a powerful and tragic piece of theater? That was the only thought I had for many weeks while planning for the Othello lobby display. I had no experience creating an installation, which serves the purpose of supporting the dialogue of the play, but it had always been something that intrigued me. How do you decide whether interactive or purely educational? How much space does it take up? So many other questions, but the biggest is what am I wanting to say.

Before Othello began, I had a few conversations with Whitney White, director of Trinity Rep’s production, about what she would want highlighted in a lobby display, as well as conversations with Rebecca Noon, community engagement coordinator, about how displays have been designed in the past. Whitney gave me a wealth of information and ideas. Ultimately, the biggest buzz-phrase for me was “the deterioration of relationships” as I was reminded that through the racism, misogyny, toxic masculinity, and deceit, that this show remains deeply human. These characters feel very deeply for and about each other. How could I explore that? I should also add that a big part of this display was thinking of militaristic iconography that could act as the visual vehicle for the display. It was quite the Google deep dive, but in the end I loved the idea of using dog tags. They are such a recognizable symbol for military identity, and from there I just discovered how to make the idea blend with the physical piece. 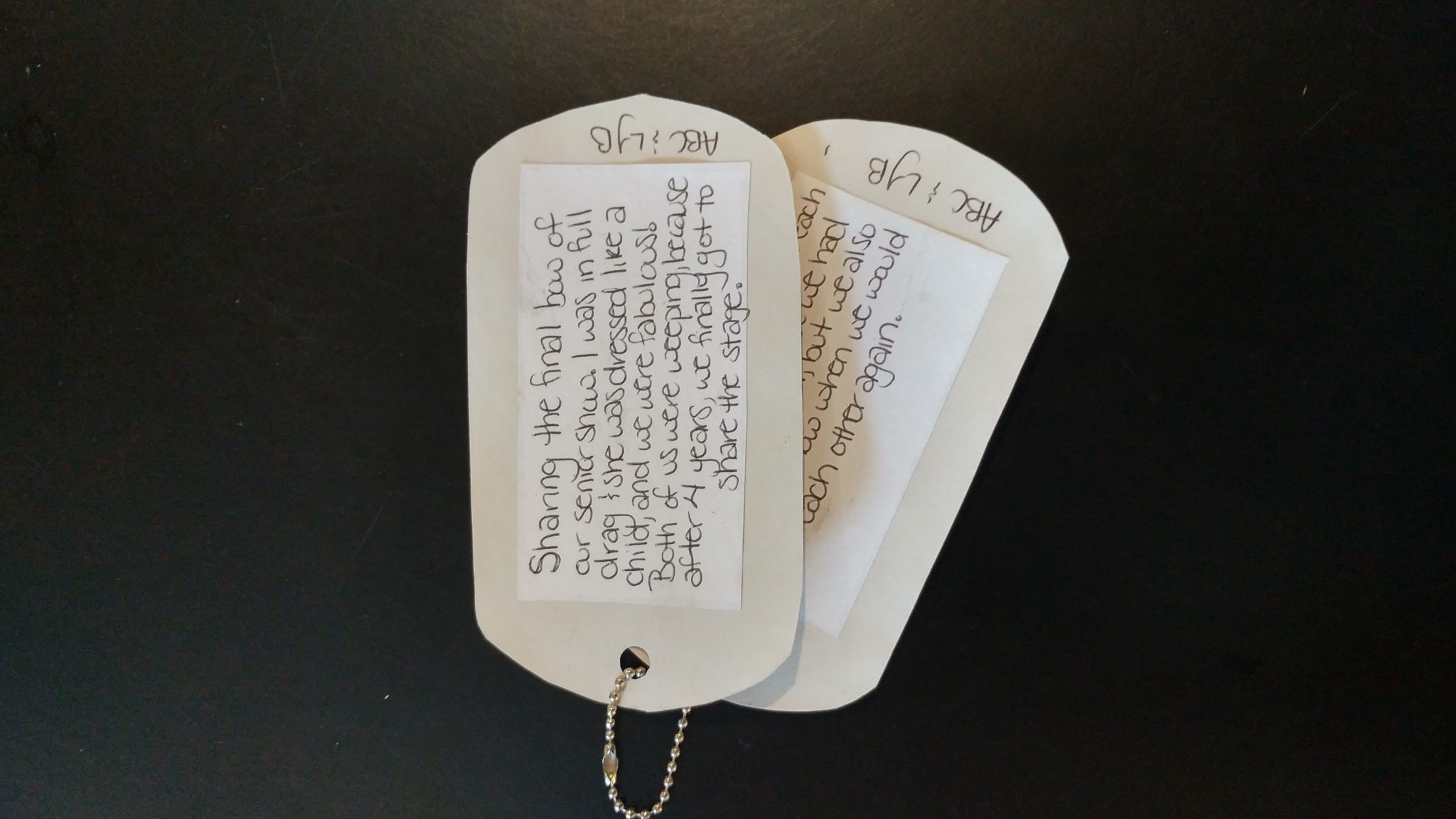 Why not take a symbol of one person’s identity and make it into a symbol of a two people’s shared identity. One relationship isn’t based in purely “good” moments so why do we try and hide the amazing complexities and hardships that go into it. We all ride the rollercoaster, bearing our teeth through the ups and downs, so to feel that human experience and be able to share that anonymously with others was my way of connecting with the story. “Tag a Loved One” was me creating space for our audience to tap into those feelings we have for the people we hold dear, because ultimately those are the people who leave the deepest scars.

During the day, I would go stand in front of it, reading tags for a while. Some of the tags were incredibly heartbreaking and others were filled with such joy, and I would stand there feeling so much sympathy and connectivity with people I had never met. I think that was the best way to go into Othello for me: feeling connected to a stranger. This show is so totemic that it can be cliché or desensitized for those of us who read it multiple times for school or have been in a production at some point; however, if you open yourself and stop focusing on the old English, we can all feel the resonance this show has within it. Take time whenever you can to really reflect on the people we hold dear, because they somehow made it through every test of time to still be here with you, and you with them.

“And when I love thee not, chaos has come again”