Travel Back in Time to Providence’s Theater Past

by Maurice Decaul and Michael Guy with information from the Providence Public Library’s Rhode Island Theatre Collection, curated by Kate Wells. Thanks also to Bill Applegate at The Players for providing the perfect photo! 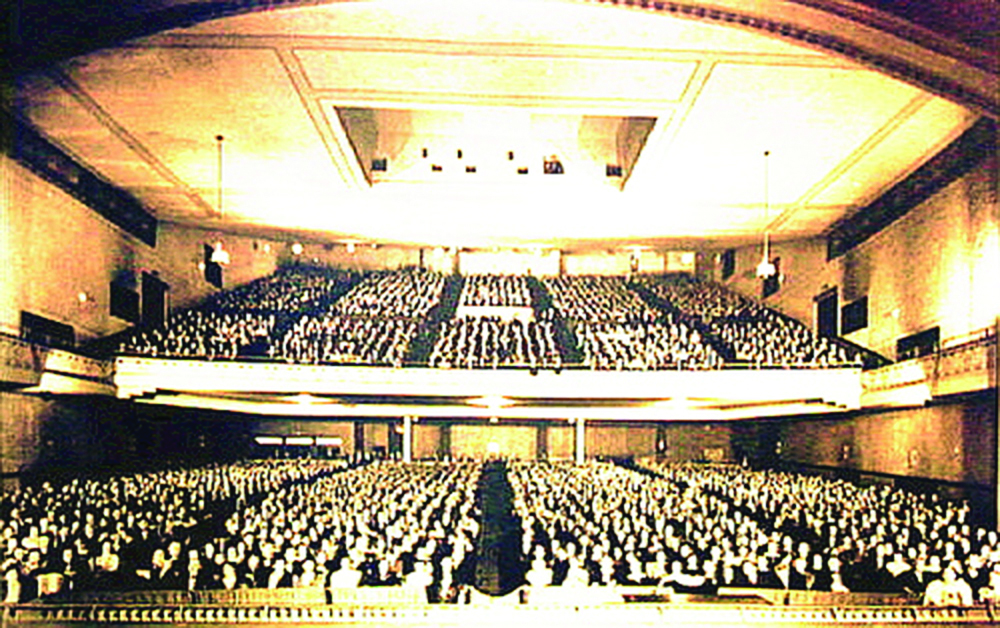 The night skies of Providence had long been lit by its many theater marquees and even during World War II, the shows went on. Theaters, large and small, produced ambitious seasons despite difficulties the war presented. Though records are available for only a few local theaters, the number of productions is dizzying and must have provided war-weary Rhode Islanders with welcomed respite. (Trinity Rep’s own majestic theatre ceased presenting vaudeville and plays in 1923, and in 1942 — the year in which Into the Breeches! is set — it was one of the city’s premiere movie palaces, along with Loew’s, which is now home to the Providence Performing Arts Center.)

Early in 1942, The Script Players on Benefit Street presented The Prodigal, An Obscure Analogy by Robert H. Simister; Henry III the 2nd by Richard H. Turner; and The Polls Were Closed by Frank merchant. the metropolitan theatre, at chestnut and Weybosset streets (now the location of Beneficent House), presented The Ballet Theatre’s Slavonika by Vania Psota and Antonín Dvořák, and Philip Barry’s Without Love.

The summer of 1942 was a productive moment in the capital city. Playhouse-Providence, on Westminster St., presented George Washington Slept Here by Moss Hart and George Kauffman, Watch on the Rhine by Lillian Hellman, Old Acquaintances by John van Drunen, George Bernard Shaw’s Candida and Pygmalion, Johnny Belinda by Elmer Harris, No Time for Comedy by S.N. Behrman, Separate Rooms by Alan Dinehart, and Private Lives by Noel Coward. In her write up of Playhouse-Providence’s presentation of Suspect by Edward Percy and Reginald Denham, reporter Dora Patten quotes famed British actress Flora Robson as “praising Rhode Islanders for donating blood at the new blood plasma bank set up by Blue Cross at the Rhode Island Hospital, because transfusions have saved so many lives.”

Playhouse-Providence and the Metropolitan completed the summer with Reflected Glory by George Kelly, Little Women by Marian deForest, Out of the Frying Pan by Francis Swann, and Skylark by Samson Raphaelson. The fall line-up included presentations of Clare Booth Luce’s Margin for Error, the Pulitzer Prize-winning plays Abe Lincoln in Illinois by Robert E. Sherwood and Street Scene by Elmer Rice, Ballet Theatre’s Swan Lake, Franz Lehar’s The Merry Widow, Gilbert and Sullivan’s The Pirate of Penzance, Patrick Hamilton’s Angel Street, and Watch on the Rhine by Lillian Hellman.

From 1943–45, the Playhouse-Providence and the Metropolitan welcomed at least 20 shows each season, including names familiar to us today: Arsenic and Old Lace by Joseph Kesselring, You Can’t Take It with You by Moss Heart and George s. Kauffman, The Petrified Forest by Robert Sherwood, Life with Father by Russel Crouse and Howard Lindsey, Porgy and Bess by George Gershwin, and Blithe Spirit by Noel Coward, plus Big Time with Ed Wynn: The Perfect Fool — A Variety Revue!

From keeping the lights on to needing more male actors, the war presented an array of challenges for local theaters. The Players at the Barker Playhouse at 400 Benefit St. (which holds the title of America’s oldest little theater) presented four plays for their 1942-43 season, including Return Engagement by Lawrence Riley, for which a woman was responsible for the lighting for the first time in the theater’s history (see below). The group had to relocate its winter plays in 1943 and 1944 they published the following plea on the back of their program for Susan and God: 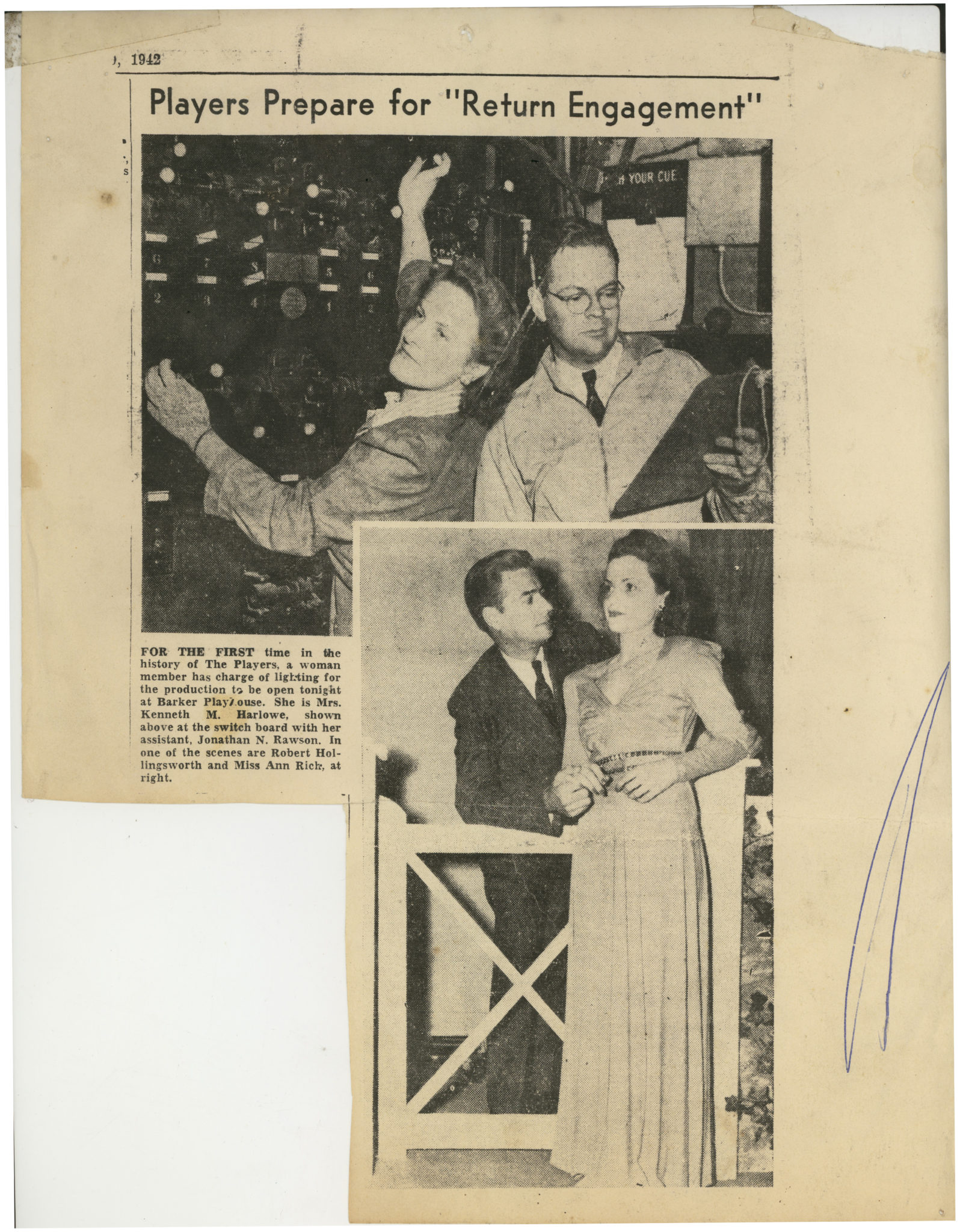 BROTHER CAN YOU SPARE A FURNISHING? DURING THE WAR PERIOD, it is most difficult for the PLAYERS to hire or borrow furniture. IF YOU CONTEMPLATE discarding any item we might use, give us first choice. Often, we can recopper, repaint or reupholster a piece which looks hopeless in your home, but will shine on our stage. We will be glad to arrange for picking up any wilted but essentially sound pieces you may wish to dispose of. We have a lot of Victorian, but need badly empire, Georgian, some of the Louis and a few modern jobs which can be recovered, The House committee is still interested in a few rugs and a standing lamp for two for the Green Room. If you can help us, call Percy Pryce, Gaspee 2855, or drop a penny postcard to Players, 400 Benefit Street, or best of all, talk it over with your usher. WE NEED YOUR HELP. THE PRODUCTION COMMITTEE.

This request’s cheery optimism reflects the resourcefulness and moxie that allowed Providence theater makers to survive — even thrive — during WWII. In fact, The Players continues to produce theater today!