Where are They Now? Interns Return to Trinity rep for Into the Breeches!

The first day of production for Into the Breeches! was not just about getting the actors to start learning their lines or to start blocking the show – it was also a reunion for two of Trinity’s former interns. Porsche McGovern, who is the lighting designer for Breeches, and Tyler Dobrowsky, the director of the show, were both interns in the 2003-04 season, with Porsche serving as the Electrics intern and Tyler serving as the Education intern. Porsche comments on the reunion, laughing and saying, “I hadn’t seen Tyler for six years!”

Tyler’s favorite thing about being an intern was “getting to meet and become friends with my fellow interns, and also coming to work at a theater every day,” and Porsche agrees saying that she believes the staff were the best part of her internship.  She goes on to say about the staff: “They were very patient with me, I came in not knowing – well not anything – but I didn’t have the hard skills. The staff was very patient with me, very kind in showing me how to do things. They let me try things, and then would come back and say what the easiest way to do x,y, and z was.”

Another fun fact about Porsche and Tyler’s internships? During the 2003-04 season they both worked on Trinity Rep’s The Henriad (Tyler was even on the poster for the show! See below.) and that’s the same production that the characters in Into the Breeches! are putting on. It’s crazy to think that they’re working on the show within a show together – but fifteen years apart. 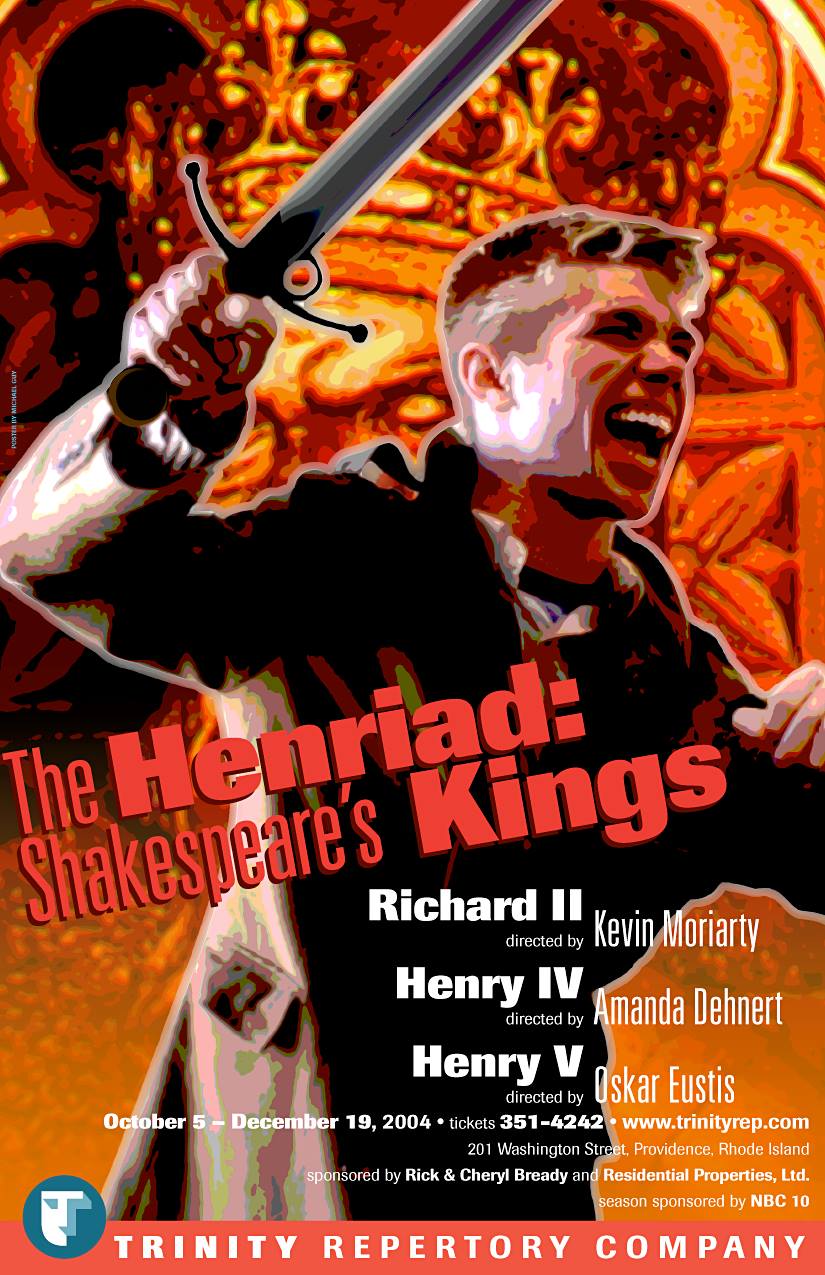 Both Tyler and Porsche have had different paths since the end of their internships. Tyler, as he says, never left Trinity Rep. “I went on to be the education director for a number of years, and then in January 2010 I became the associate artistic director, which I’ve been ever since.” Porsche, on the other hand, went on to graduate school and she also was given a fellowship to the Oregon Shakespeare Festival. Since then she’s worked on numerous performances and freelanced all over the country.

Coming together for Breeches meant a lot to both of them. Porsche says the best things about working on the show were: “(Stage Manager) Sara Sheets and Ryan Burkle, the electrics intern. They’re both lovely people and I’m so happy to have worked with both of them.” While Tyler says, “My favorite thing about working on Breeches was working with George, the playwright, as well as the great cast and crew on such a fun, funny, sweet play.”

Being that it’s been fifteen years since their internship and both Tyler and Porsche have grown in their careers, and have reunited for Breeches, we thought it might be wise to find out what advice these two have for those considering an internship with Trinity Rep, or those that are currently interning.  Tyler says: “My advice to interns would be, if you want to be involved in theater as your career, learn to do everything, say yes to most things, try and have a positive attitude, don’t take yourself too seriously, take the work VERY seriously, and make friends with the people you work with.” Porsche gives her advice, saying: “Everybody comes back around, don’t be mean to people. You never know when someone is going to pop back up in your life.” She goes on to explain that not only has she worked with Tyler again but she’s also worked with other former Trinity Rep staff and interns, such as Deb Sullivan. She never thought that working at Trinity would open so many doors but she’s still working for others that are connected to Trinity in some way.

With this reunion drawing to a close as the end of Into the Breeches! nears we’re so happy to have had these two back at Trinity and look forward to all they do in the future.

Interested in becoming an intern yourself? We are currently accepting applications for the 2018-19 Season for all aspects of the theater. Internships include housing and a stipend as well as the opportunity to take acting classes. For more information and descriptions of the internship roles please click here.