Joe Wilson Jr. on America Too

With America Too 2018 happening on Monday, October 22, our Marketing Intern Maxwell Snyder sat down with Coordinator of Activism through Performance and Resident Acting Company member Joe Wilson Jr. to talk about the growth of the upcoming annual event.

Maxwell Snyder: What sparked the creation of America Too?

Joe Wilson Jr.: The project began about four years ago. I had just received the Fox Foundation Fellowship for Distinguished Achievement, which is issued by that foundation and the Theater Communications Group. My task in that fellowship was to not only write a play about Billy Strayhorn, which I’m developing, but to explore, as Billy did, the artist’s role as activist and community advocate and finding a way to have my work reflect the values of our community. In that first year, I was sent to Ferguson, Missouri to do a one-week residency through the Oregon Shakespeare Festival and the One-Minute Play Festival where we wrote one minute plays about the issues surrounding policing in our neighborhoods based on a series of interviews and public forums. These came to be known as the Every 28 Hours Plays. Trinity Rep was committed to going immediately from Ferguson to producing these plays the very next week in Providence. I came back on Sunday and we produced the plays the next Monday. We had 200 people signed up to witness the play reading and twice as many showed up. It engaged this community in such a robust conversation; it was a pretty incredible thing to watch.

MS: That’s amazing! How did this work inspire others to be active in their communities?

JW: The following year, all of our national partners then used our model of producing to do the plays at their own theaters. Since we had produced the plays the previous year, I wanted to find a way to expand the conversation. So I went to a bunch of colleges in the area and employed Dominic D’Andrea, who is the founder of the One-Minute Play Festival. Dominic came to Providence and we developed our own plays through conversations in our community around policing. That year, we produced the Every 28 Hours Plays again on one night and the following night, we produced our response plays. And again, it was an incredible, incredible evening of seeing a diverse, vibrant, activated community having an important discussion.

MS: Why is it important to fit something like this into our season?

JW: Because we select our seasons a year in advance, there really isn’t a space for the work to be as responsive as we want it to be. Especially in this 24-hour news cycle, where so much is happening and so much information is being generated constantly. This responsive place in our season is a place to lift voices in the community. There are folks within the community who have been working on issues for a very long time and with Trinity Rep stepping into the conversation, I wanted to make sure that we were using our privileges and resources to lift the voices of those folks. So we spent an entire year of continuing conversations and really finding what issues were bubbling up in the zeitgeist. In examining this question of who is America for, we feel we must use our theater’s resources to highlight, elevate, and excavate these issues that continue to be challenges within the community. Not only to have these communities speak and give their voice but also to acknowledge that there is so much happening politically, socially, and economically and realize that we are often in our own bubbles while creating theatre.

MS: This year’s topic is the Providence Housing Crisis. How did you settle on that topic?

JW: A group called DARE (Direct Action for Rights and Equality) saw the good work that we had been doing in A Christmas Carol this past season and they asked how they could help us engage the community as activists with our art making. So we had a series of conversations with DARE and they educated us about gentrification and affordable housing and the complexities around that. In many ways, artists are often viewed as “gentrifiers” – going into neighborhoods that had been in existence for a long time and “rejuvenating” them, which often times, leaves behind the people who had been there for generations. After discussing with DARE for a long time, we decided to make America Too this year about the housing crisis in Providence. We identified playwrights who had been in conversation with DARE and their members and asked them to write short plays around the topic of housing instability. Over the course of four workshops and several conversations, these plays will be the focus of America Too 2018: Providence Housing Crisis.

MS: How have you seen America Too affect the work at Trinity Rep?

JW: This project has allowed this institution to become different. It has allowed this institution to examine who and what we are and to ask ourselves a central question: “Are we producing work at this theater that is reflective of the values of our community?” This is an important question to consider as we strive to create a public square – a place that all people are welcome. You can’t welcome people into a space if, once you welcome them, they aren’t feeling nurtured. So this idea of providing work and providing food for people in the community is not just about the work that we put on stage, but how we train our actors in the community to be actors, activists, and public servants. We are changing the paradigm in this theater that art making is not a luxury item. That plays and art making isn’t a thing that needs to be or should be consumed, but that art making and art process is a critical way that we engage in conversation.

MS: Why do people need to come to this event?

JW: This event has rocked over the past four years. It has been a highlight of the fall season at Trinity Rep that people look forward to because of its raw and responsive nature. You never know what’s going to be said or what questions will be asked. Seeing people sit next to and discuss with someone whom they probably would not have otherwise is so inspiring and moving. 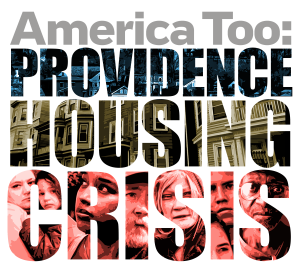