To my friends, from Curt: Character, and Othello’s Characters 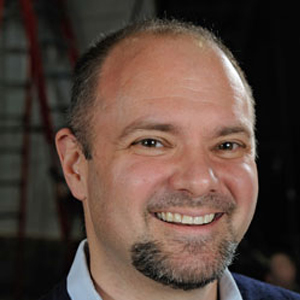 Every week on the Trinity Rep blog we have a quick note, thought, idea, or message from our Arthur P. Solomon and Sally E. Lapides Artistic Director, Curt Columbus. Join us each week for the newest post in “To my friends, from Curt.”

Our next opening here in the Chace Theater at Trinity Rep will be Othello. This unparalleled play has long been on our list of fascinating projects, not only due to its popularity among high school students (who have consistently listed it as the Shakespeare they most want to see produced at Trinity Rep for Project Discovery), but also because it is a story that speaks to any age that grapples with military power and political intrigue. With its nearly operatic depictions of love, deception, honor, and betrayal, it is also a thrilling challenge for theater artists like the Trinity Rep company.

At the heart of the play is Othello, a military hero who fights for Venice, yet he is not Venetian; he is a “Moor.” The word Moor derives from the Latin Maurus meaning “inhabitant of Mauretania,” now northwest Africa, including Morocco and Algeria. During the Elizabethan era, it was a term that was applied broadly and indiscriminately to non-Europeans, including people of African, Middle-Eastern, and even Indian descent. The term has a complicated, often troubling history in England, dating back to the crusades of the Middle Ages, so it is very clear that Shakespeare has dreamed his main character to be an outsider from his very inception, simply by applying this word to him.

Yet, in spite of his complicated outsider status, Shakespeare means Othello to be a man of unassailable character. As the critic Harold Bloom tells us: “He is admirable, a tower among men… Othello is indeed noble; his consciousness, prior to his fall, is firmly controlled, just, and massively dignified, and its own kind of perfection.” Shakespeare’s mercenary general has lived a wide-range of experiences, from slavery in captivity to unparalleled military success. He is admired by the Venetians for his cool temperament in battle and his sharp military mind, as well as his ability to lead his troops in any situation.

What then is his tragic flaw? It is that his exquisite, military mind, trained to find and fight its enemies without question or hesitation, cannot see the shades of grey as they emerge around him. You are either with him, or you are against him. There is no middle ground. This becomes his tragic flaw when he gets disinformation, when his trusted councilor fills his mind with lies, and he cannot distinguish the complex truth from the alternative facts as they are presented to him.

Shakespeare’s warning about the capacity for the manipulation of a noble mind by an unscrupulous hand has broad-reaching repercussions for anyone who considers the puzzle of this play. How does one’s training, which guarantees success in one part of life, make one susceptible in other areas? More importantly, how do we distill what is true and what is false? Whom can we trust for truth in a time of tumult?

All of this is simply one aspect of an endlessly tantalizing play. We are thrilled to have this talented ensemble working on this material, and to have one of our beloved artists, Whitney White, at the helm as director. This Othello will be a stirring experience, so lean in and enjoy the ride. I can’t wait to talk with you about the show, and I look forward to seeing you at the theater.