Behind the Costumes: Pride and Prejudice

Maxwell Snyder, our Marketing Intern for the 2018-19 Season, recently sat down with Olivera Gajic to talk about her designs for Pride and Prejudice.

As we gear up for our first show of the season, what better way to get ready than by delving into the gorgeous costume design by Olivera Gajic. This is her eighteenth show here at Trinity, and she outdoes herself every time. If you remember those classically gorgeous costumes from Into the Breeches! last season, then you’re more than familiar with the marvelous work that Olivera can do.

Coming from the playful and fun world that director Birgitta Victorson found within Kate Hamill’s script, Olivera found a way to visually enhance the tried and true period aesthetic of Pride and Prejudice. Audiences may expect to see the period costumes from the Regency Era, when the novel was written and is set, but Olivera took us a step further, giving us comic exaggeration for each character. In order to make these costumes unique, Olivera added her own flare; from Mrs. Bennet’s wedding cake hat to the exaggerated and extravagant costume for Miss Bingley. 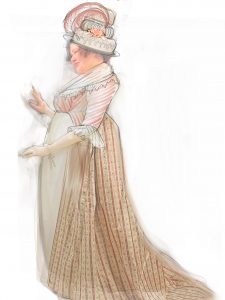 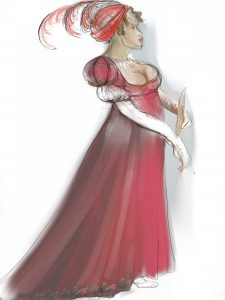 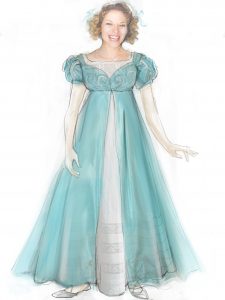 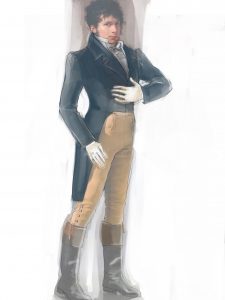 Starting from the “seed” of the design, there is a concept of paper dolls being given new outfits and garments to become a new character altogether. Since this production has actors playing multiple characters, including characters of different genders, it was important to establish a “neutral base” for each actor – a white outfit that allowed each actor to comfortably start onstage, creating a sense of a group of actors. This neutral base would then be added to with every character – giant garments and costume pieces that will make the actor unrecognizable from the previous part they were just seen as. Olivera says: “I also like to have fun with the audience. I don’t want to deceive them, but to be a little more ambiguous. For example, they think it’s classical, but it blooms into something more visually fun.”

Since this is a new adaptation of a classic story, it was important for the designs to match the scope in which this story is being told. Kate Hamill’s adaptation debuted in 2017 and there needed to be a sense of modernity to the production, despite being a period piece. We definitely get to see that modernity in Olivera’s designs, shining alongside this fabulous script, set, lights, and direction. Pride and Prejudice runs October 4 through November 4.