In Trinity Rep’s production of Macbeth — one of Shakespeare’s most famous plays, written in the early seventeenth century in London and set around 1050 or so in Scotland — you will see actors in modern dress (jeans, suits, etc.), a DJ playing contemporary music , and many allusions to current American society. There may be a gun when someone describes a sword. The script will be trimmed down slightly, with some of Shakespeare’s language cut so the play isn’t too long. A hopelessly antiquated word or two will be changed to something that sounds a bit more familiar to our 2019 ears.

This is how Shakespeare is generally produced these days, at Trinity Rep, as well as around the world. Very, very rarely is Shakespeare done “traditionally” — meaning, I suppose, with actors in plush pumpkin pants and Elizabethan dress, and without any cuts to the text. (Or, in the case of Macbeth, the costumes and the setting would look to resemble medieval Scotland, in keeping with the ostensible setting of the play.) The Globe Theater, in London, does perform “traditional” Shakespeare, but that is more the exception than the rule.

Over the past few seasons alone, Trinity Rep has produced a Julius Caesar in modern clothing, with a female Caesar in a white pantsuit; A Midsummer Night’s Dream that took place in a high-school prom in 1986; and an Othello set in a contemporary American military barracks. The Gamm Theatre, one of our fantastic sister Rhode Island theaters, produced a version of Macbeth set during the first World War just a few years ago, and last spring performed a gender-bending version of As You Like It in relatively modern dress. 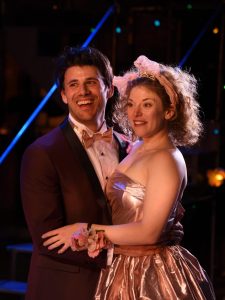 Daniel Duque-Estrada as Lysander and Rebecca Gibel as Hermia in Trinity Rep’s 2017 production of A Midsummer Night’s Dream.

Both plays directed by Tyler Dobrowsky. 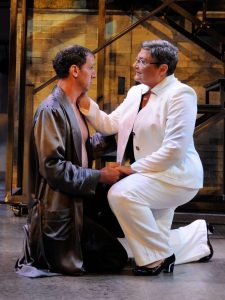 Mauro Hantman as Calpurnius and Anne Scurria as Caesar in the 2015 production of Julius Caesar.

Both plays with sets by Michael McGarty and costumes by Olivera Gajic.

The most famous example of Shakespeare’s text being manipulated is the history of King Lear. Lear, like Macbeth, is one of Shakespeare’s great tragedies; it ends with (400-year-old spoiler alert!) first Cordelia, Lear’s daughter, being executed in prison, and then Lear finding her body and dying of grief. In short, it does not end well for the main characters. However, for most of the 17th and 18th centuries, a completely different version of the play was performed, one not even written by Shakespeare and with an honest-to-god happy ending. Yes, all the villains in the play are vanquished, and Lear and Cordelia lived happily ever after. It was thought that this happy ending better suited the times, and in fact, it ended with “the King’s blest restoration” which was an obvious reference to the current monarch, Charles II. By the 1800s, though, Shakespeare’s original text was replaced and that became the popular version and the one we still use today.

The use of contemporary design elements started to creep into performances around 1920 — this is when you first start to see directors taking Shakespeare’s text and, using contemporary costumes and props, transposing it over a modern setting. Over the next decade or two, directors began to take more and more liberties with Shakespeare’s plays — in the 1930s, Orson Welles did a number of innovative productions of Shakespeare that proved to be quite influential. First was his production of Macbeth, which was performed in Harlem, featuring a completely black cast, and which took place on a fictional Caribbean island. The second was a 90-minute version of Julius Caesar produced in 1937 which depicted Caesar as a fascist, Mussolini- or Hitler-type figure. Given the political nature of Caesar, it can be somewhat controversial when updated to modern times — look no further than Oskar Eustis’ production of Caesar in Central Park a few years ago, with a Donald Trump-like Caesar, that ended up as a talking point on Fox News and with protestors rushing the stage.

With the advent of film, Shakespeare’s stories were given a new life, sometimes keeping Shakespeare’s text (Orson Welles, Laurence Olivier, and many others made relatively straight-forward film versions of Shakespeare’s greatest plays), and sometimes the movie would just borrow the basic plot: for example, Akira Kurosawa’s Throne of Blood is Macbeth set in feudal Japan, and West Side Story is Romeo and Juliet in New York in the early 1960s. For some reason there was a run of these kinds of adaptations in the late 1990s — the Amanda Bynes vehicle She’s the Man is based on Shakespeare’s Twelfth Night and the romantic comedy that introduced Heath Ledger to America, Ten Things I Hate About You, is based on Taming of the Shrew.

There are, of course, logistical reasons why Shakespeare is produced this way: there is no copyright on Shakespeare’s work, so people are free to borrow and adapt and change as they see fit. But it’s not just that: there really is a universal appeal to his work — I’ll never get over how words written hundreds of years ago can reveal parts of me to myself that I didn’t even know were there; that plays so old, and with language so diff 0ent from my own, can teach me about my world and my place in it. That’s why Shakespeare still excites me — when I sit down in a theater before a production, I think, “How will Shakespeare’s text be used this time?” What new things will he teach me given a new context or setting?

I hope that’s how you feel before seeing our latest production of Macbeth. I know I can’t wait to find out.