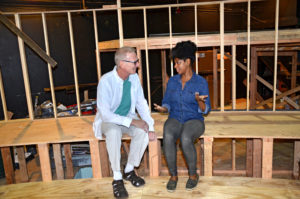 Tyler Dobrowsky: What excites you most about the play you’re directing?

Tiffany Nichole Greene: What most excites me [about directing Skeleton Crew] is the microscope we get to take into the lives of the hard working laborers of this nation that America sees as disposable. When the truth is that they are not disposable. They are vital to the growth and stability of our nation. Our economy. Our quality of life. They are not easily replaced. They just have nowhere else to go. They are, in fact, trapped. I’m excited and honored by the opportunity to expose that crucial distinction.

Brian McEleney: Everything [about directing Death of a Salesman] excites me. Working with great actors on a great play; what more could a director want? One of the many extraordinary strengths of Death of a Salesman is the richness, depth and complexity of its characterizations. In addition to directing, I’ve been an actor and an acting teacher for most of my life. Nothing gives me more joy than working with wonderful actors on roles that challenge them to bring the best of themselves to their work. In this production I get to work with Stephen Berenson, Phyllis Kay, and other members of the Trinity Rep company and the Brown/Trinity Rep MFA program on bringing the Loman family and Arthur Miller’s unforgettable words to life.

In 1979 I was just out of drama school and saw the Trinity Rep production of Salesman that was directed by Larry Arrick. It was one of the greatest theatrical experiences of my life. Ford Rainey. Carmen deLavallade. Richard Jenkins. Dan Von Bargen. It was awe-inspiring: passionate, personal and raw. Magnificent actors baring their souls. I hope we can live up to their example almost 40 years later.

Tyler: Death of a Salesman is one of the most iconic plays of the 20th century — why do you think it has endured, and how is it still relevant in 2017?

Brian: Greatness endures. Greatness is always relevant. Arthur Miller was doing something tremendously ambitious with this play: he set about to write a tragedy, an honest-to-God Greek style tragedy, with a common person as the central figure. The language and situations of the play are familiar as words and actions of people we recognize, and yet there is also an explosive, titanic poetry to the dialogue that makes us realize we are watching a primal human event that goes way beyond realism. The play is grounded in the specificity of mid-century American experience, but it also aims for and achieves universality: Arthur Miller never tells us what Willy the Salesman sells. He is a salesman. He is all salesman. He is all of us as we struggle for human dignity in a Darwinian economy with the sound of the spade at our backs. 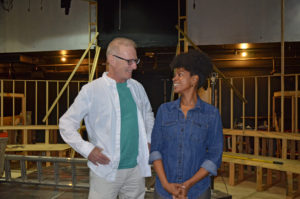 Tyler: Skeleton Crew was a huge hit in New York recently, and it’s now one of the most produced plays in the country regionally. What are some of the reasons for its success, do you think?

Tiffany: First of all, Dominique Morisseau is a beast. She’s just a great writer. She is specific, cutting, and intimate in her approach. This play possesses all of those qualities. It’s a contemporary look at a time we seem to think we’ve left behind. With so much focus on the those who “succeed,” we forget the many below, supporting these structures we proudly climb. This play takes the time to focus on the base of the pyramid, not the point. And not with pity, but with a critical eye.

Tyler: The New York Times has compared Morisseau’s writing to Arthur Miller quite a bit recently — do you think that’s an apt comparison? What are some similarities between the two plays, either thematically or structurally? What are some of the differences?

Brian: Clearly, both authors are interested in the effects that large cultural and economic forces have on individual lives. They both offer a critique of unfettered capitalism and the myth of the “American Dream.” What happens when the economic culture places more value on shareholders’ profits than on rewarding workers? Our system is built to reward investors, entrepreneurs, visionaries, inventors, risk-takers — the very people who probably need the least help. What do we do about the people who aren’t visionaries or creators or natural leaders, or who are handicapped in any number of ways that make them less competitive? Do we just call them “losers” and toss them aside? Is “winning” really everything? What do we do about the people who are left behind? Does a rising stock market and the promise of lower taxes really excuse an utter lack of values in our political and cultural discourse? Both authors very successfully use a specific human event to ask the big questions about who we are as a nation. Morisseau, of course, offers the great service of giving voice to African-American and female experiences that have been missing in our theatrical canon, and demands that we ask the age-old questions with even more contemporary urgency.

Tyler: What do you hope the audience takes away at the conclusion of your play?

Brian: I hope they will feel that they have seen a human life in all its tragic glory. That they will watch the awe-inspiring struggle of a Lear-like figure in the person of an American Everyman, and see America both as it was and as it still is. Maybe they’ll take the experience with them for the rest of their lives, as I did all those years ago as I watched Richard Jenkins teach me what great acting could be and what was possible in the theatre.

Tiffany: I hope that they leave feeling compelled to pay attention. I hope they remember the people they get to know in this play when they vote, when they purchase a new house or car or piece of clothing, when they go out to eat. I hope they leave with an impulse to consider the complications capitalism and the people at the base of the pyramid.