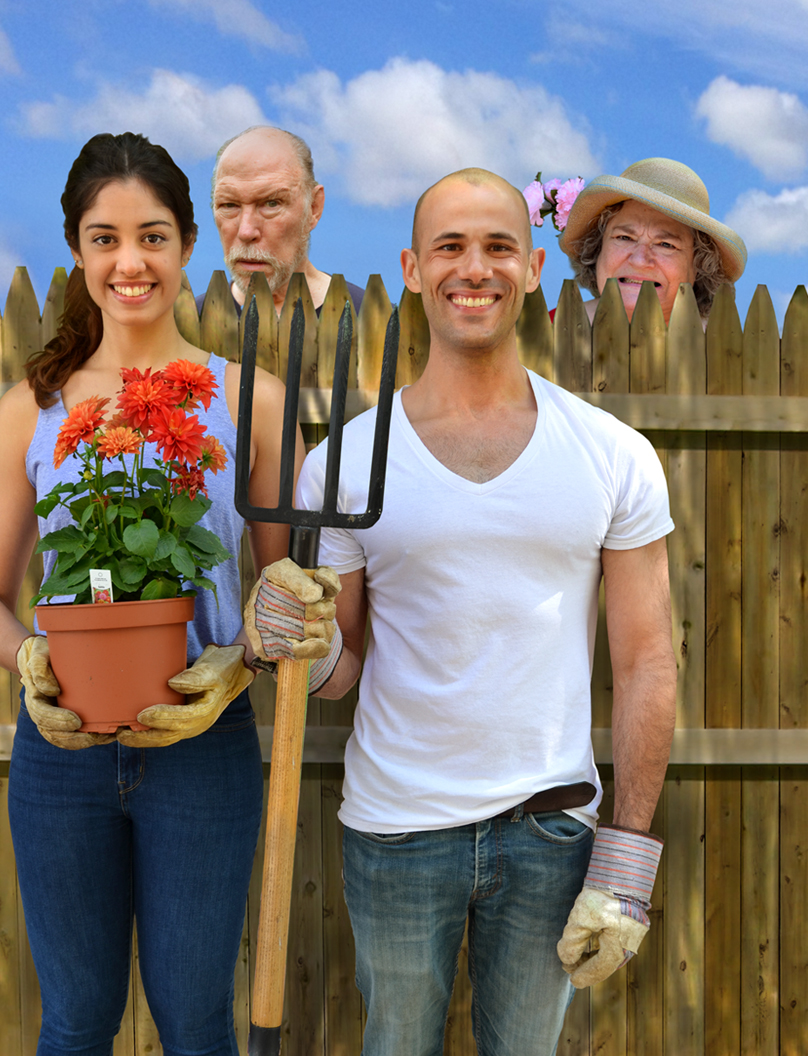 Pablo and Tania are new to the neighborhood. Virginia and Frank have been fixtures in the area for decades. They all agree that the chain link fence separating their yards has got to go! A quick replacement with a stately wooden fence will arrive just in time to impress both Pablo’s bosses and the judges viewing Frank’s elaborate English garden. Everyone starts off on the right foot, but when the truth about that old fence is revealed and Tania’s vision of native plants and wild flowers doesn’t align with Frank’s pesticide-dependent masterpiece, a sparkling comedy of good intentions and bad manners blooms.

Please note: an herbal cigarette is smoked on stage during one scene of the play.

Buzz
"'Native Gardens' turns out to be a production that you want to see for all the fun, and for all the meaning, too. Don’t miss it, if you can help it."
Bill Gale, RIPR
"This is comedy, and the production now at Trinity Rep delivers laughs -- and gasps -- as the tale unfolds."
Kathie Raleigh, The Sun Chronicle
"Even though in early April it's still freezing outside, spring is on the way, and this play is a breath of fresh air. Excellent performances all around, and amazing sets by Dahlia Al-Habieli make this play a hilarious and thought-provoking night of theatre."
Andria Tieman, BroadwayWorld
"...'Gardens' will keep your attention in a funny and thoughtful show, definitely a must see."
Will Demers, EDGE Media Network
Prev2018 AprNext
Prev2018 MayNext
Prev2018 JunNext
Prev2018 JulNext
Prev2018 AugNext
Prev2018 SepNext
Prev2018 OctNext
Prev2018 NovNext
Spoiler Alert!

Pablo and Tania Del Valle, a young Latino couple (a lawyer and Ph.D. candidate, respectively) have just moved into an affluent Washington, D.C. neighborhood. Their older white neighbors, Virginia and Frank Butley, are pleased to have a young couple next door– with a baby soon on the way, no less– if a little nervous about the changes happening in their community.

When Pablo needs to host a barbecue at their new home for the partners in his firm last minute, he and Tania approach the Butleys about tearing down the chain-link fence that separates their yards and putting in a nice new one. The Butleys are thrilled to have the eyesore fence removed and agree. It will certainly help in the upcoming judging of Frank’s pristine English garden. He is not pleased, however, to learn that Tania intends to plant a “native garden” with only local plants.

As the Del Valles start to plan for the new fence, they learn that their property is actually bigger than they all think: it expands 15 feet into the Butleys’ yard. They approach Frank about the mix-up, and he’s both angered at the idea of having to change his entire garden the day before it’s judged for the big horticultural competition and hurt, thinking the Del Valle’s are accusing him of stealing their land on purpose.

When each of the spouses goads each other into fighting more and more, the property debate elevates into a broadly comedic borders debate, where good intentions give out to some bad manners when race, taste, and class tensions explode between neighbors. Accusations are thrown around and feelings are hurt, but at the end of the day, a surprise comes along that might even bring peace for the families. After all, as they say, good fences make for good neighbors.