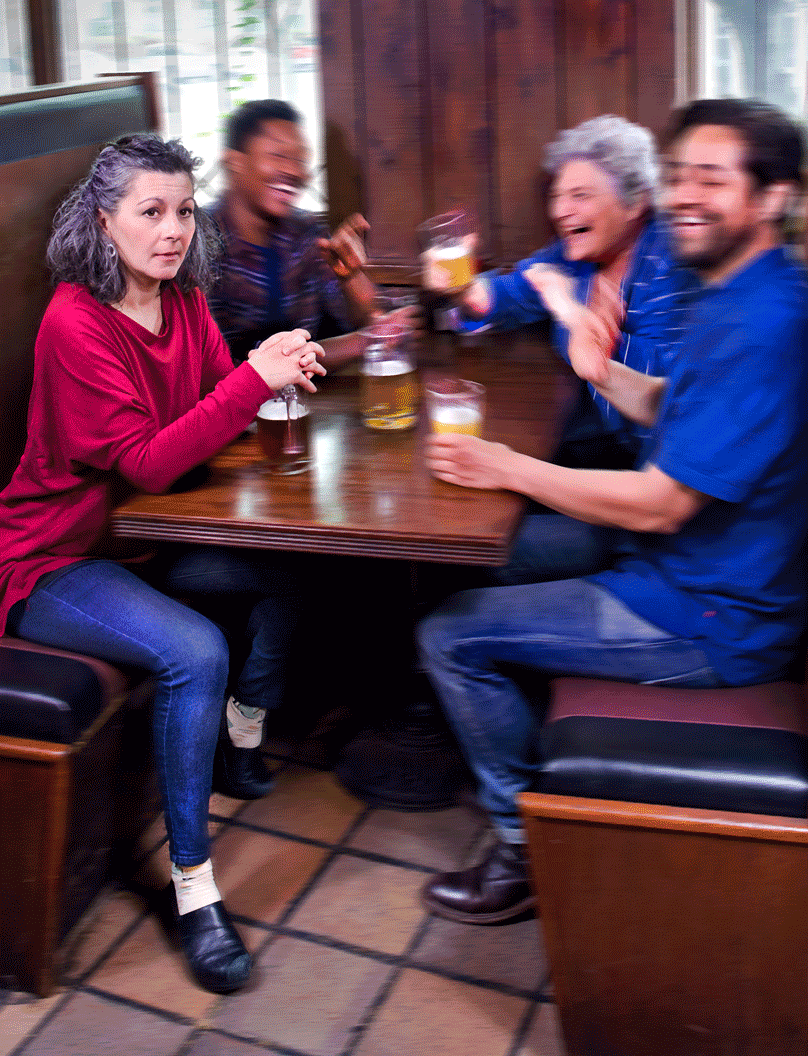 Based on the recommendations and policies of local and federal officials and our own commitment to the health and well-being of our community, Trinity Rep has made the difficult decision to cancel all remaining performances of Sweat and Sweeney Todd, in addition to the previously announced cancellation of A Tale of Two Cities. Read more here.

Warm humor and tremendous heart permeate this Pulitzer Prize-winner and hit Broadway play. Deep in the Rust Belt, blue-collar factory workers swear by longtime friendships that seem unbreakable. These women spend their days working at physically-demanding jobs and their evenings laughing over drinks and dreaming of retirement. But mistrust, pride, and the economic pressures from a changing America introduce fissures in the foundation of this chosen family. Soon the bonds shatter, forever altering the path of two generations.

It is 2008 and we meet two young men. Life has not been easy for them, but what’s led them to this point remains uncertain. We have only a few moments with them before we go back eight years into the past.

In January 2000, the news reports that the booming stock market is widening the income gap between the poorest and richest American families. But at the local bar in Reading, Pennsylvania, a group of friends aren’t worried about that. They’re celebrating the birthday of one of their own, drinking, dancing, and exchanging local gossip. Cynthia, Tracy, and Jessie work together at the local factory, Olstead’s.

Tonight they have no worries, but there’s a simmering sense of unrest bubbling just under the surface. Cynthia and Brucie’s marriage is on the rocks. Chris and Jason, sons of the women celebrating, are looking ahead to their own futures. Chris has aspirations beyond Olstead’s but Jason remains loyal and believes he’s not going to find anything that pays better than the factory floor.

There have been rumors about the plant closing for years, but nothing has come of it yet. The work is hard, but they’re proud of their work and loyal to the factory. Plus,  they’re looking forward to the payoff – a comfortable retirement.

They are intrigued by a rumor that is true – a management position is opening up and word is they’re looking to hire someone from the factory floor. Cynthia wants to apply and Tracey, somewhat reluctantly, decides she will, too.

The stable world this group has built their lives on is starting to crumble. Cynthia and Tracey’s friendship buckles under the weight of resentment when Cynthia is chosen for the supervisor position. The trust they had in their employer wavers when they find out the shop is hiring non-union labor. What once seemed so secure now feels uncertain. Fear and feelings of betrayal bubble to the surface. Intent to protect themselves, suspicions grow and racial tensions rise.

Then the fear becomes a reality – the layoffs begin. Then the pay cuts and the lock outs. Any hope of those in management remaining friends with those on the factory floor is gone. What started as simmering resentment has exploded into outright hostility.

Now in upheaval, the members of this community struggle with how to take care of themselves and each other at the same time.

Next at Trinity Rep: Producing Pulitzers

2/20/2020 By Caitlin Howle With our upcoming production of Sweat by Lynn Nottage, which won the Pulitzer Prize in Drama...

By playwright Lynn Nottage Lynn Nottage Several years ago I received a commission from the Oregon Shakespeare Festival to write...