The Song of Summer First Rehearsal

2/14/19
Maxwell Snyder, our Marketing Intern, sat in on the first rehearsal of The Song of Summer, written by Lauren Yee and directed by Taibi Magar.

As we all hiked up the many, many stairs to the Nelson Rehearsal Hall to escape the snowstorm, we were all excited to start working on this new production. The cast, crew, staff, donors, subscribers, and community builders all introduced themselves around the room, but everyone was excited to meet the woman of the hour, playwright Lauren Yee. The production is being led by Obie Award-winner and Brown/Trinity Rep alumna Taibi Magar ’14. The two shared anecdotes of their relationship (meeting at Trinity Rep in a snowstorm, only to be reunited at Trinity Rep in a snowstorm) and the incredible experience of working on this world-premiere production together.

Featured in this production is an original song, the titular song of the summer, written by Max Vernon and Helen Park. The composing duo recently wrote the music to the new musical KPOP, which was met with much success in its off-Broadway debut in 2018. A new song will be featured in the production, written specifically for Lauren Yee’s script. 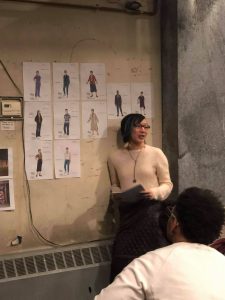 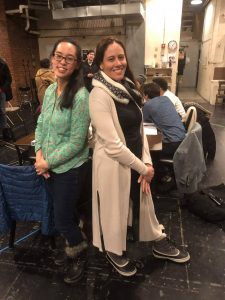 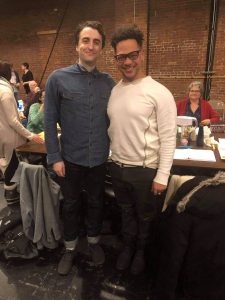 Taibi Magar introduced and explained the set designs by Adam Rigg, which obviously had to include squeezing a Waffle House onto the stage of our Dowling Theater. The world of the play could not be complete without the wonderful costume designs by Valérie Thérèse Bart. She spoke about the inspiration of her design, which totally could have just been an excuse to put Charlie Thurston in a skinny suit and a deep V-neck t shirt to create a pop music icon fashion moment. The other costumes contrast his LA Music Industry look to help build the small town of Pottsville, PA, with Anne Scurria’s floral night gown really driving this show to a new level. 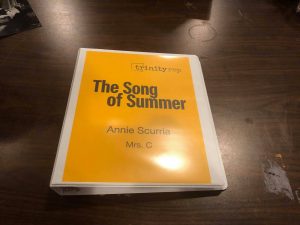 Once we got a feeling for the world of the play, the actors were off to develop their characters. Anne Scurria, Joe Wilson, Jr., and Charlie Thurston sat around the table, welcoming back guest artist and Brown/Trinity Rep alumna Tina Chilip ’06 to the room/cast. The room lit up with laughter as the actors started reading their lines around the table, breathing life into Lauren Yee’s words. Taibi Magar told everyone in the room that Lauren Yee is the queen of dialogue and it showed as these actors had all the fun in the world with her script.

Just as Robbie visits his home in The Song of Summer, you can visit your home for dramatic discoveries for this amazing production! This wonderful show begins performances on March 14.