Updates and Thanks from Trinity Rep’s Executive Director 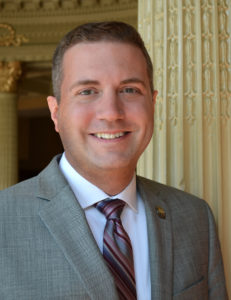 A letter from Tom Parrish on last season, and the season that’s beginning.

As Trinity Repertory Company transitions from one theater season to the next, I did not want the opportunity to pass to thank you for your support and patronage during the 2016-17 Season. This was my first full season at Trinity Rep, and it has been a pleasure getting to know you and Providence, as we work to move the organization forward toward a more stable and impactful future for the benefit of this entire community and region. You are what make Trinity Rep a home for dramatic discoveries, exploding with activity that feeds the soul and inspires dialogue through unparalleled theatrical experiences. I am thrilled to share with you all the incredible results you and your community investment made possible last season.

The season was a tremendous artistic success, with many memorable performances, sold-out shows, and celebratory moments. The season opened with the rocking musical Beowulf: A Thousand Years of Baggage. Then the biting, contemporary comic-drama Appropriate sparked great conversation as the characters unearthed the ghosts of their past. During the holidays, Southern New England’s holiday tradition of A Christmas Carol had record-breaking sales and near capacity crowds, becoming the highest grossing single cast production in Trinity Rep’s 53-year history (and sales for this season’s version are trending even ahead of that, so get your tickets early). With sold-out and award-winning performances, The Mountaintop’s breathtaking and cathartic re-imagining of Martin Luther King, Jr.’s last night on earth was particularly memorable and timely. Tyler Dobrowsky’s fresh, 1980s-inspired production of A Midsummer Night’s Dream became the hit of the season, marking the 50th Anniversary of Project Discovery and introducing over 7,000 students to the work of William Shakespeare. The world premiere of Faithful Cheaters by playwright-in-residence Deborah Salem Smith exceeded sales goals and capped the season in the Dowling Theater, winning the Motif Award for Best New Work. And Like Sheep to Water, or Fuente Ovejuna was a spectacular, epic-scale production that brought the community together shouting “Yo soy Fuente Ovejuna” (“I am Fuente Ovejuna”). There is great energy and momentum at your theater right now and that is due in no small part to your patronage and philanthropy.

In addition, I am happy to report that the 2016-17 Season was financially strong as well. While maintaining a stellar national reputation, the organization has long had a history of financial challenges and under capitalization, with a persistent structural deficit of up to $1 million annually. In our efforts to build a strong and exciting future, and to be effective stewards of this community jewel, we implemented a number of changes – some which may have been visible to you, but most not. As a result, total ticket sales last season exceeded our goals (including the record-breaking A Christmas Carol) and full-season subscriptions grew for the first time in years. Since 2015, earned revenue (ticket sales, educational income, concessions, etc.) has grown 13%, Annual Fund donations have grown 25%, and we restructured the organization’s long-term debt. Combined with prudent expense management, the structural deficit has now been effectively eliminated, and last season Trinity Rep operated with positive cash flow for the first time in well over a decade – an exciting achievement for the many Trustees, volunteers, and staff that have been laboring for so long to make Trinity Rep’s finances work. That said, we now begin the transition from surviving to thriving, and I am confident that with your continued support, we will take this organization’s programs and services to new heights.

Looking to the Future

To achieve Trinity Rep’s long-range vision, at the June 2017 Annual Meeting, the Board of Trustees launched a new three-year strategic plan built on advancing three goals: Great Art, Great Business, and Great Place to Be. Each of these goals will be advanced by activities in four key areas: Programming, Brown/Trinity MFA, Patron Development, and Facilities.

Programming objectives include a strong emphasis on fostering equity, diversity, and inclusion; deeper and broader community engagement; a balanced, varied and exciting repertoire; acting company development; and enhanced educational endeavors. With the Brown/Trinity Rep MFA, we seek to develop a more organizationally integrated, academically distinctive program that leverages the strengths of Brown University and Trinity Rep to take our Top 5 program even higher in the rankings. Patron Development objectives include relationship building, loyalty development, branding and communications, and growing demand. In stewarding and leveraging our multiple facilities, we will develop a comprehensive Facilities Master Plan to utilize the existing Cultural Facilities Bond and any new funding to revitalize our facilities into dynamic, functional and inclusive spaces for live performance and community gathering.

As Artistic Director Curt Columbus said at the Annual Meeting, “We can become our community’s 21st century gathering space, filled with 21st century programming. We can be a national leader in all aspects of our programming, while being fiscally and socially responsible. We are poised for a great future at Trinity Repertory Company. Let’s make that future happen, together.”

It has been a busy summer at your theater, as we prepared for the exciting season ahead. Firstly, we renovated the Sarah and Joseph Dowling, Jr. Theater and Lobby. From new seats and carpet to a re-imagined and refurbished lobby, we hope you find the space to be welcoming and inviting. With additional lobby seating and gathering spaces, we invite you to use the space to socialize with friends, family, and other audience members. If you come early for the free pre-show Prologues, there is now a great place to grab a drink before the show.

The other major facility investment this summer was replacing the old heating, ventilation and air conditioning system. Hard to imagine, but the old system included only one zone for our huge building, plus oil heat – very expensive and very inefficient. The new system utilizes natural gas and has divided the building into multiple heating and cooling zones with more energy efficient mechanical equipment.

All of this facility work, designed to lower operating costs and enhance your experience, was made possible thanks to the Rhode Island Cultural Facilities Bond.

And thanks to a generous donation from one of your fellow patrons, we invested in open captioning equipment this summer, allowing us to launch a full series of open captioned performances on the first Sunday matinee of each production. Featuring an LED display on the stage with live text of the performance, audience members with hearing loss (or those who might just want help deciphering an accent) will have greater access to Trinity Rep performances.

You may also have noticed that we launched a new logo and website in July. The new mobile-friendly website is full of resources to assist you in purchasing, enhancing, sharing, and engaging in your theater experience. Each show’s page features dynamic behind-the-scenes content and information to bring you closer to the art and the artists who are making theater for and with you. Later this fall, we will also be transitioning to a new ticketing system that will enhance your online ticketing experience and allow us to provide you with even better and more customized service.

The 2017-18 Season kicked off with a day of free preview events and activities on September 10. Rehearsals started for the opening shows, a rotating repertory schedule of Arthur Miller’s masterpiece, Death of Salesman, harmonizing through history on the theme of the American Dream with Dominique Morisseau’s Skeleton Crew.

This is an exciting time to be a part of Trinity Rep, and we’re so glad you are with us on this journey. I hope you feel proud of all you helped us to accomplish this past year. You are an essential partner in fostering a creative home for Rhode Island’s artists, audience, students, and community partners to reinvent the public square. Thank you!