1/10/19
Maxwell Snyder, our Marketing Intern, sat in on design presentations from the first rehearsal of the upcoming production of Macbeth with Curt Columbus on Thursday, January 3.

As the confetti still falls from ringing in the New Year, the cast and crew of Macbeth came together to celebrate the start of a new production. With The Arthur P. Solomon and Sally E. Lapides Artistic Director Curt Columbus at the helm, this production is bound for glory.

As you may know, Macbeth was Curt Columbus’ gateway into the theatre. At the age of 12, Curt made his on-stage debut as the titular character in his school’s production of this Shakespearean tragedy. Once a younger student asked for his autograph after the show, Curt was hooked on the fame and glory that inherently accompanied middle school productions of Shakespeare and the rest is history. 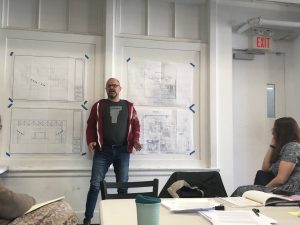 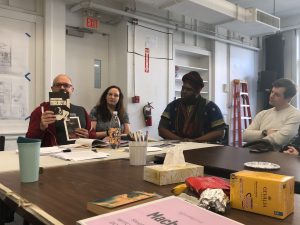 The powerful passions of Macbeth and Lady Macbeth are both scary and alluring. To Curt, there is no place scarier, yet more enticing than a nightclub. In this production, Macbeth will claw his way to the throne through the lens of a nightclub and the vigor of Scarface’s Tony Montana. As we follow Macbeth’s rise to power, we will be accompanied by local DJ and Brown/Trinity Rep MFA student Viraj Ghandi ‘18, who will be a live DJ for the production.

Setting the scene of this enticing nightclub is set designer Michael McGarty. Taking Curt’s vision of a found warehouse space turned nightclub, McGarty has filled the space with a large highway structure, hidden elevators, mirror boxes, and a netted floor battlefield. From top to bottom, this nightclub is cool, fun, and horrifying. The glitz and glam of this late night locale is courtesy of costume designer Andrew Jean, who revealed his plethora of gorgeous costume renderings. From Lady Macbeth to Banquo to Lady Macduff, the whole cast will be dressed to kill in their immaculate ensemble of pearls, suits, and athleisure apparel.

With a stellar cast, crew, and artistic team, including magic design by Nate Dendy, this production must be seen to be believed. Highlighting the multitudes of talent from all over our company, our community, and our education, this production will feature the best Trinity Rep has to offer.