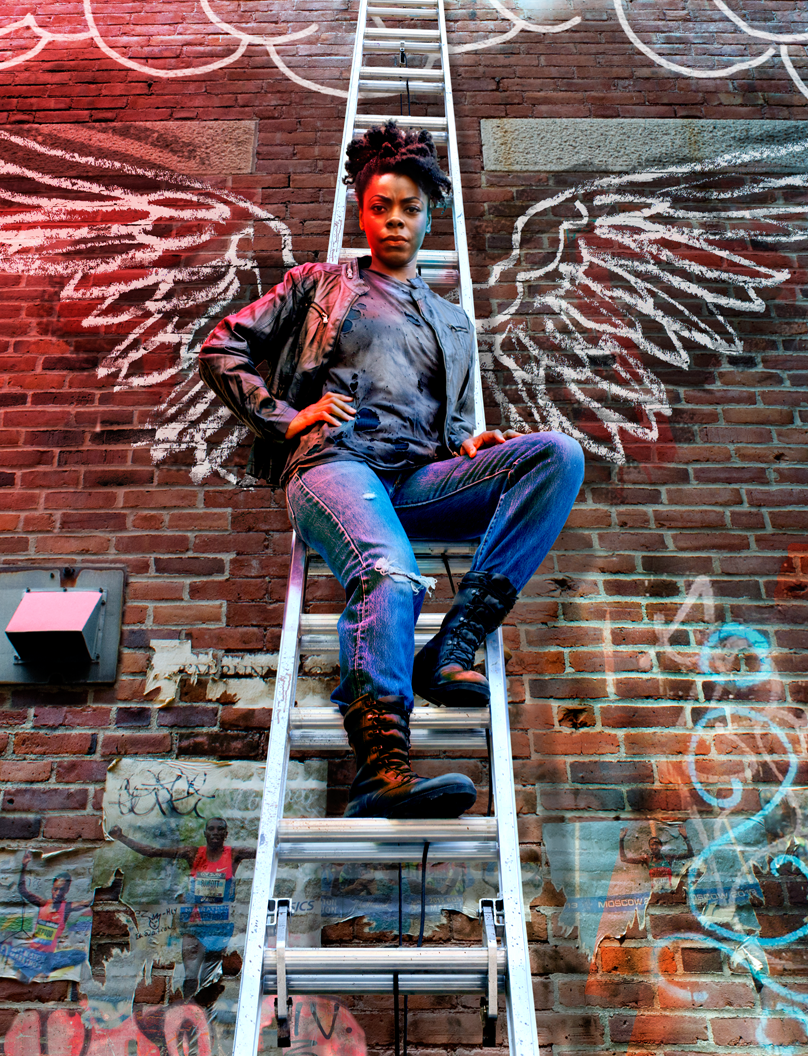 A sensational search for hope among the ruins

Marisol is a young professional used to life on her own in the wilds of the big city. But everything changes on the day she wakes up to find the world has crumbled into a surreal dystopia – the battleground of a war between the angels and God. Frightened, but resolved, she sets out through the turmoil on a journey to protect her friend. Marisol is an everywoman searching for stability in a maelstrom of chaos, holding on to hope in a world she no longer understands.

Be sure to check out this show if you’re a fan of American Horror Story, The Walking Dead, The Handmaid’s Tale, The Purge, or A Clockwork Orange.

To best prepare for this show, check out these resources.

Buzz
Directed by "bad-boy, visionary" Brian Mertes, 'Marisol' is "raw, surreal...if you’re jonesing for the Trinity of yore... 'Marisol' should fill the bill."
Channing Gray, The Providence Journal
"....a production that’s suffused with blinding enthusiasm for brash and brave storytelling. Shows like these aren’t just the reason we go to the theater, they’re the reason we have theater."
Kevin Broccoli, Motif Magazine
Trinity Rep ends its season on a particularly high note with Marisol...The play careens around from magical realism to tragedy to absurdist comedy...This isn’t the sort of show Trinity does very often; you won’t want to miss this.
Law and Order Party
“a fantastical look at a world in which society is crumbling, nothing is as it was, and humans are left to find their way through disaster…but things begin to make sense, and there is a sense of hope, in Act II….there is humor – from sardonic to absurd -- in the writing and in cast members’ full-tilt performances.”
Kathie Raleigh, The Woonsocket Call
"I suppose crazy good is one way of describing the extraordinary play that is 'Marisol.' Let me also add magical, wild, primal, head-scratching, timely, eye-opening, thought-provoking, political, well-directed, perfectly-cast, intriguing, compelling, unforgettable, epic, dreamlike, puzzling, humorous, hopeful, loud, fantastic and wonderful to the mix.
Nancy Burns-Fusaro, The Westerly Sun
Complex, attention grabbing, current, loved it!
I was blown away. The acting was superb. The stage direction was innovative and edgy. The play was shockingly and terrifyingly appropriate for the current times.
Another extraordinary choice for your adventurous theater!
"The play continues to demand my attention; not just tears, but action. For that I am grateful."

Marisol Perez has worked hard to get where she is. She’s working a white-collar job in Manhattan at a science textbook publishing company, she has a coworker, June, who is a good friend, and her life is “normal,” for what it is.

Though she works in Manhattan, Marisol still lives in the criminal hell that is the early 1990s Bronx, which is where she grew up. One night on her commute home, she is nearly assaulted by a mad man on the train. Narrowly escaping death, she returns to her apartment only to hear the violence of her neighborhood as she tries to get some sleep.

As she sleeps, Marisol is visited by her guardian angel. She reveals to Marisol that she has been protecting her for her entire life. The angel then explains to Marisol that God is dying and can no longer take care of the world that he created. The angels have decided that they must protect the earth and try to bring order back into the world and that the only way to do this is to go to war with God. The angel tells Marisol that she is on her own now since the angel must take up arms with the fellow angels. The angel explains that she can no longer protect Marisol and leaves her to fend for herself.

The next morning comes and Marisol goes to work where June rushes to her side. She explains that there was a vicious attack on the Subway the night before and that a woman named Marisol Perez is dead – a woman with her name. Shaken, Marisol tries to work but ends up confessing to June that she had a dream the night before where she was visited by her guardian angel. Marisol is then visited by a man who seems out of touch with reality. He demands that Marisol pay him for his work on a film. When Marisol explains that he has the wrong location, he refuses to leave. The man continues to harass Marisol until June appears. Both women are visibly shaken, and June suggests that she and Marisol leave work and go to June’s home.

At June’s apartment, in Brooklyn, Marisol meets June’s brother, Lenny. Lenny immediately makes Marisol uncomfortable by taking her hand and kissing it, as well as showing her a sculpture that he’s made based on his love for her. June tries to make light of the situation but she and Lenny quickly end up in a verbal argument. June accuses Lenny of being a deadbeat and throws him out of her house – immediately asking Marisol to move in and take his place. Marisol excitedly agrees and decides to return to the Bronx one last time to collect her things. As she leaves, Lenny sneaks back in and strikes June – leaving her for dead.

As Marisol is packing at her Bronx apartment she hears a knock on the door. It’s Lenny, who has come to be with Marisol. He brings her flowers, tells her that they are meant to be together, and lets it slip that June had an “accident” and then Marisol sees the golf club. She begs Lenny to tell her what happened to June. He tells her that she must be with him and that in return he will offer her protection. After trying to talk to Lenny about what happened, he admits to hitting June with the club. Enraged, Marisol yells at Lenny and attacks him. Marisol runs away only to realize that the world around her is crumbling because the angels and God are at war.

Suddenly, everything is different. It is much warmer, even though it is supposed to be the dead of winter, and the street is trashed. Marisol has encounters with a number of characters, all of whom have suffered because of the war. Marisol decides to make her way to Brooklyn to find June when she comes across Lenny – who is now pregnant. They speak for a few moments before they hear a Nazi who has come to attack them – when they realize that the Nazi is June.

Marisol is trying to remind June of who she really is when Lenny goes into labor. She and Marisol rush to his side and help him birth a baby – but it is stillborn. The three begin a trek across Brooklyn to find a place to bury Lenny’s baby. When they reach the graveyard, Marisol is overcome with emotion. She is quiet for a moment and then it dawns on her what she must do — she turns to Lenny and June and tells them that they must find the angels. She explains that they must fight with them to help save the world from destruction and despair.

Suddenly, one of the strangers from Marisol’s journey reappears and kills Marisol. She dies instantly, but Marisol closes the play by describing the war between the angels and God, and reports that the humans finally come together to help the Angels win the war, restore peace, and usher in a new millennium.

5/7/19 By Kate Brandt The title of today’s play might sound familiar to some Trinity Rep theatergoers, even though this...

Tom Parrish 5/7/19 This season — featuring stories of gods and demons, angels and icons — was larger than life,...

To My Friends, From Curt: Marisol

“We All Have the Potential… To Be Angels.”

Waking Up to a World That’s Falling Apart

Mathewson Street Church and the 134 Collaborative

2 hours and fifteen minutes with one intermission
Dowling Theater