Book by Terrence McNallyMusic by Stephen FlahertyLyrics by Lynn AhrensBased on the novel "Ragtime" by E.L. Doctorow 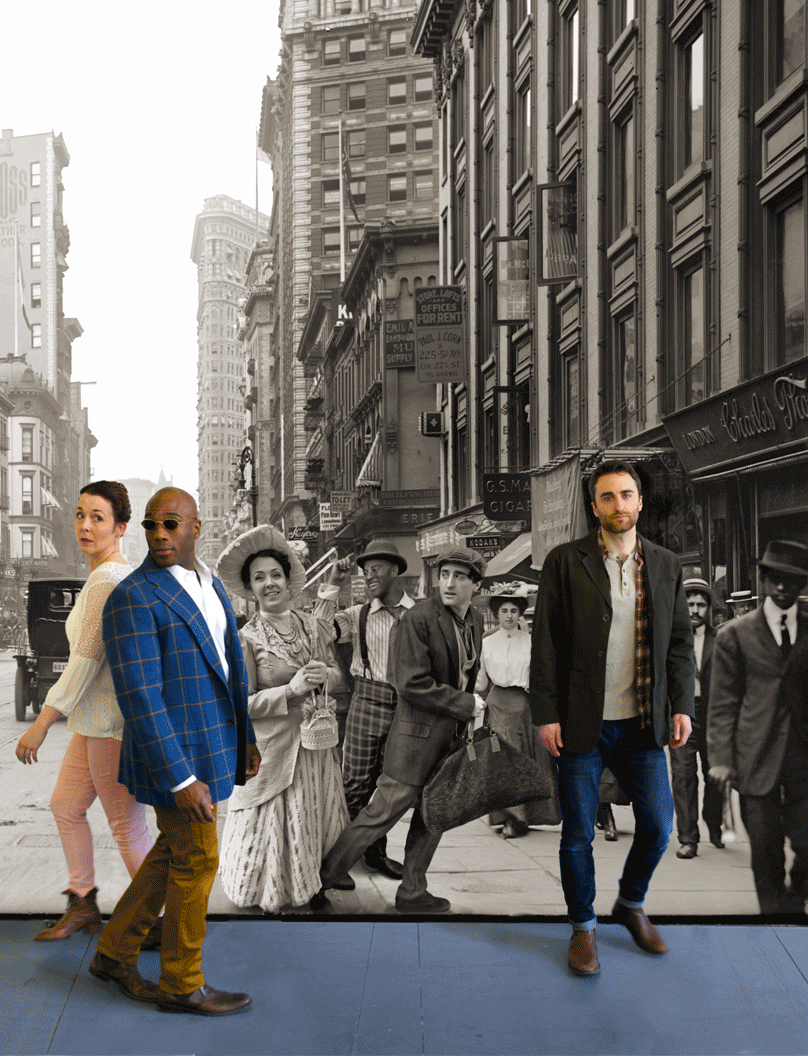 Based on the celebrated novel, the Tony Award-winning Ragtime shines a light on all that has and hasn’t changed in America since the turn of the 20th century. In the early 1900s, optimism and possibility are as prevalent as burgeoning racial and social volatility. The lives of an upper-class white mother, a Jewish immigrant, and a bold African American musician from Harlem intersect in ways that profoundly affect their families’ fates. A passionate, vibrant, Tony Award-winning score heightens the tenderness and tension that will rouse and inspire audiences.

Buzz
"...what Trinity does best — gritty, honest theater that’s not afraid to tackle the tough issues head on...among the best the season had to offer."
Channing Gray, Providence Journal
"Run do not walk to the box office before this show is completely sold out."
Tony Annicone, Theater Mirror
"While there are dozens of words to describe the production of 'Ragtime' currently on stage at Trinity Repertory Company, the first that comes to mind is “wow.” Just wow. And then a plea: Go."
Susan McDonald, Sun Chronicle
"Rhode Island's must-see performance of the year."
Veronica Bruscini, Broadway World
"...this "Ragtime" cannot be missed. "
Will Demers, Edge Media
"There is so much to love about this show’s ambitiously scaled-down concept and its stirring ideas and dreams. "
Janine Weisman, Newport Mercury
"...it is a powerful story done with professional grace and power."
Bill Gale, RIPR
"In this paean to the melting pot that was America, Trinity Rep once again showed its versatility and talent. Bravo, Bravissimo!"
Linda Phillips, Newport Seen
"A striking portrayal of hardship and hope, 'Ragtime' prompts me to sidestep the nostalgia and propels me into action."
Kara Marziali, The Jewish Voice
Prev2018 AprNext
Prev2018 MayNext
Prev2018 JunNext
Prev2018 JulNext
Prev2018 AugNext
Prev2018 SepNext
Prev2018 OctNext
Prev2018 NovNext
Spoiler Alert!

It’s New York City at the turn of the 20th century and three different communities welcome the audience to their world. First, an upper-class white family from the wealthy suburb of New Rochelle: Mother, Father, Mother’s Younger Brother, Grandfather, and the Little Boy, Edgar. Next, in Harlem, is the African-American community, where the beautiful Sarah enjoys the new music of Coalhouse Walker, Jr. Lastly, Jewish immigrants moving into the tenements of the Lower East Side find their home, namely artist Tateh from Latvia and his young daughter. The only connections these communities have to each other are the celebrities they all know and read about: businessmen J.P. Morgan and Henry Ford, activists Booker T. Washington and Emma Goldman, and entertainers Harry Houdini and Evelyn Nesbit, who became a star when her lover murdered her wealthy husband.

Mother and Father say goodbye as he leaves on an expedition to the North Pole, leaving Mother alone for the first time in her life.His ship passes Tateh’s: Father thinks about how the immigrants “don’t have a chance” in his country, Tateh wonders why anyone would leave America.

Mother’s Younger Brother is always trying to find his passion, and for now it’s Evelyn Nesbit. He watches her perform and professes his love for her. She kisses him for the attention of the press, but doesn’t really have any interest in him.

After finding an African-American baby in her garden, Mother invites the child’s mother, Sarah, into the Family home, claiming responsibility for them, even though she knows her husband would not approve.

Immigrants arrive at Ellis Island, and Tateh tries to make a living selling drawings on a cart on the street corner. As his Little Girl becomes sick, Tateh becomes desperate for money. When a wealthy stranger offers to buy her from him, Tateh is angered and becomes disgusted in his new country. He thinks of the success immigrant Harry Houdini, and Tateh decides to sell his cart and try his luck somewhere else.

Coalhouse introduces his new music, called ragtime, and sings lovingly about Sarah, whom he can’t find after he broke her heart. When he learns she’s in New Rochelle, he comes up with a plan to win her back, starting with a visit to the Ford Factory to buy the new Model T.

On his way to Sarah, Coalhouse is accosted by a volunteer fire squad who are angered by the site of a black man driving his own car. At the same time, Sarah thinks about how her heartbreak and fear led to the baby in her arms. Coalhouse finally makes it to the Family house and is shocked to learn he has a son. Though Sarah turns him down at first, he persists courting her, eventually leading to Mother inviting him inside. Coalhouse tells her about his plans to support his family playing ragtime, and Sarah and he reunite.

Mother, Younger Brother, Sarah, and Coalhouse have formed a tight-knit bond, which upsets Father as he comes home. Father grapples how much he has missed and how unsure he is of the changing world. Coalhouse and Sarah are inspired by the words of activist Booker T. Washington and dream of a great life for their son.

In a Worker’s Hall, Emma Goldman rallies the group, talking about the textile mills in Massachusetts, where the workers’ strike against their working conditions has turned violent. Tateh, who was working there, escapes with Little Girl, showing her a flipbook of moving images he invented to calm her down. When the train conductor sees it and buys it from him, Tateh realizes he’s invented a product people will buy.

In New Rochelle, Coalhouse and Sarah are stopped by the volunteer fire squad again. When Coalhouse refuses to give them the money they demand, the group destroys Coalhouse’s Model T and rolls it into the lake. When Coalhouse is not able to find comfort in the justice system, Sarah goes to a campaign rally to convince the Vice Presidential candidate to help them. As she approaches him, J.P. Morgan mistakes her for an assassin, and she’s beaten to death by Secret Service. As she’s buried, people wonder when every American will truly have equality.

In a dream sequence, The Little Boy watches Harry Houdini escape a dynamite-covered box. When he wakes from his nightmare, he warns Mother something bad will happen.

Following Sarah’s death, Coalhouse decides to take matters into his own hands and pursue his own justice. He kills several fireman and bombs the volunteer fire house, but Booker T. Washington condemns his actions. Still, other young angry men think Coalhouse has the right idea and support him. Father is frustrated at Mother for making them the center of the Coalhouse scandal, since they still have custody of Sarah and the baby. Mother is upset and urges Father to talk to their son about what is going on, but he is too horrified by all the immigrants suddenly surrounding him in their world to do so.

Father moves the family to Atlantic City to get away from the chaos in New York. As they walk along the boardwalk, they see Tateh directing a film crew under the name “Baron Ashkenazy:” he has since reinvented himself as a movie director. Atlantic City is full of Evelyn Nesbit, Harry Houdini, and other celebrities who are in the down spiral of their careers. As The Little Boy and The Little Girl become friends, so do Mother and Tateh.

In New York, Coalhouse and his followers, including Mother’s Younger Brother, threaten to blow up J.P. Morgan’s library. Father leaves Atlantic City, having been called in to help reason with Coalhouse, and promises Mother all will be back to normal soon. Mother knows it won’t. Booker T. Washington convinces Coalhouse not to blow up the building, reminding him of the legacy he would be leaving for his son. In the end, Coalhouse tells the group that it’s not violence that will make a difference, but words and the power of each of them sharing their story. As Coalhouse and Father make up, Coalhouse leaves the library and is immediately killed by police.

The Little Boy decides to fulfill Coalhouse’s dream to make sure each of their voices are heard. The play ends with each of the characters telling their stories and what happens in their future, all as America becomes more of a melting pot each day.

5/15/2018 Acting company member Mia Ellis sat down with Carol Drewes to tell her about where her journey has taken...

To My Friends, From Curt: Ragtime

4/23/2018 by Braxton Crewell In a conversation about a timeless and relevant tale, Trinity Rep’s artistic director, Curt Columbus, talked...