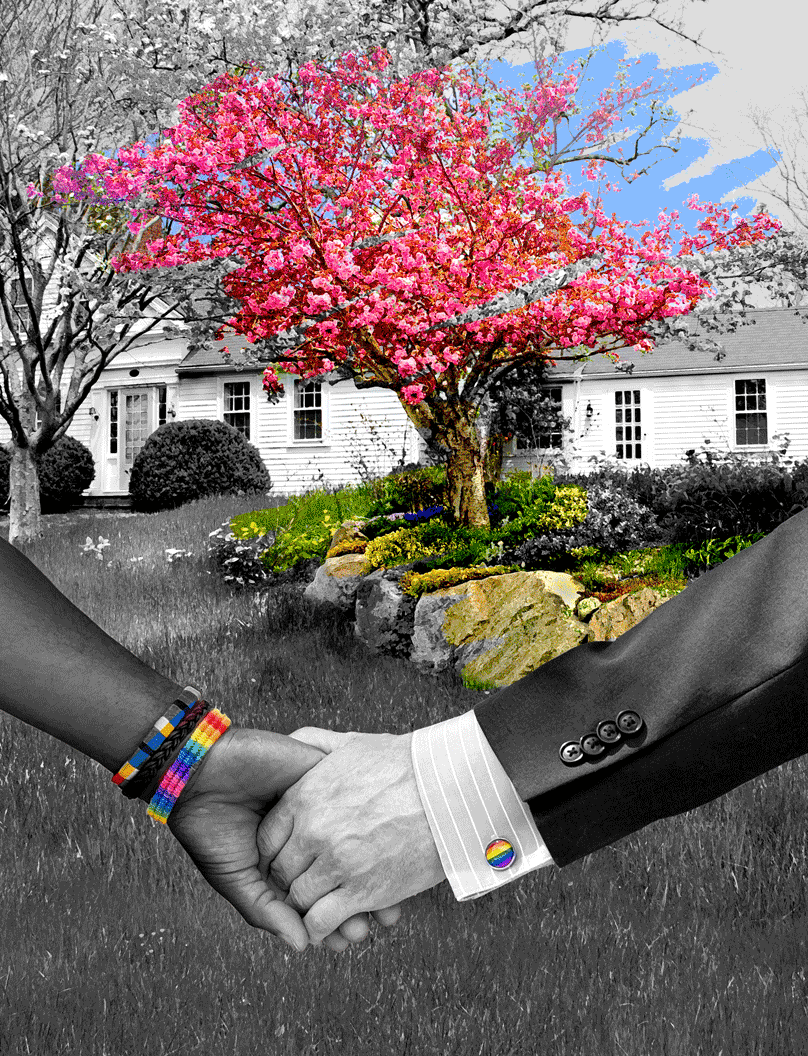 What do we owe to those who came before, and what will we leave behind?

The Inheritance weaves together the story of three generations of gay men in New York City attempting to forge a future for themselves amid a turbulent and changing America, decades after the height of the AIDS epidemic. Eric Glass is a political activist engaged to his writer boyfriend, Toby Darling. When two strangers enter their lives—one older and one younger— their plans for marriage come to a screeching halt as they veer in opposite directions into uncharted waters. This fascinating and epic two-part drama is inspired by E.M. Forster’s classic Howards End, and received the 2020 Tony Award for Best Play and the 2019 Olivier Award for Best Play.

The spirit of the author E.M. Forster, referred to here as “Morgan,” mentors a group of young men as they attempt to write their own stories, using his novel “Howards End” as inspiration. Under this framing, the writers take on the roles of various characters throughout the story that comes to life on stage.

This story begins in 2015 Manhattan, where political activist Eric Glass and his fiancé Toby Darling live a seemingly-charmed life. While Eric believes himself to be “painfully ordinary,” Toby is an ambitious writer with a mysterious past, infatuated with popularity and glamour. When Eric learns that he is to be evicted from the apartment he inherited from his grandmother, he does not inform Toby.

Toby and Eric befriend Adam, an aspiring young actor from a wealthy family, and cast him in Toby’s new play. As Adam and Toby bond during the rehearsal process in Chicago, Eric connects with his elderly neighbor Walter in New York. Walter confides in Eric about growing up as a gay man in the mid-20th century; meeting his partner, the businessman Henry Wilcox; and how he established a safe house in upstate New York for gay men dying of AIDS during the epidemic in the 1980s.

Adam and Toby begin an affair. Meanwhile, Eric and his friends debate the assimilation of LGBTQ+ culture into the mainstream, while reflecting on the progress made regarding gay rights. Despite the younger men’s optimism towards the future, and steadfast belief that Hillary Clinton will easily win the 2016 presidential election, Walter questions if these gains could just as easily be lost. To the shock of the group, Donald Trump is elected president a month later.

Toby’s play opens to rave reviews regarding the direction and Adam’s performance, but the writing itself is met with a lukewarm reception. An upset Toby returns to New York, where Eric confesses that they are to be evicted from the apartment. The two fight over the different directions their lives are taking, leading to a messy breakup. When Toby confides in Adam about the split, Adam reveals that he has entered a romantic relationship with the play’s director. This angers Toby, confesses his love for Adam, which Adam rejects.

Henry Wilcox informs Eric that Walter passed away from cancer, which he had been keeping a secret. When Henry and his sons learn that Walter’s dying wish is to give Eric the upstate New York safe house, they keep this information from Eric, questioning why he is to inherit the house instead of them. Despite this, Eric befriends Henry, who offers him a new apartment. Meanwhile, Toby indulges in parties, drugs, and hookups to conceal the pain that came from his broken relationship and stagnant career. He hires a 19-year-old sex worker, Leo, who bears an uncanny resemblance to Adam.

As Toby packs his things to move out of Eric’s apartment, the two men get into a fight. As Morgan reenters as a narrator and attempts to guide Toby, Toby questions Morgan: E.M. Forster was a closeted gay man whose sexuality wasn’t widely known until after his death. He blames Morgan for not publishing a gay novel in his lifetime, leaving the later generations to do “the heavy lifting” for gay rights. Relenting, Morgan decides to leave the young men to finish the story on their own.

Meanwhile, the Wilcoxes’ tenants living in Walter’s old house damage the property. Henry reluctantly takes Eric to the house to clean up, where Eric encounters something unlike anything he’s ever seen…

At Walter’s house, Henry suddenly proposes to Eric. Unsure whether to accept, Eric introduces Henry to his friends. They get along swimmingly until the younger men learn Henry is a Republican and donated to Donald Trump’s presidential campaign. While Eric’s friends call Henry out as a privileged, wealthy, out-of-touch white man, Henry argues that his generation paid for the younger men’s rights with their own lives during the AIDS crisis. After Henry leaves, Eric’s friends question him about potential engagement, yet Eric decides to go through with the marriage.

After being removed from rehearsals for his play due to his temper, Toby begs Eric to take him back. Eric refuses, revealing his new engagement. Toby begins spending more time with Leo, culminating in a relationship. While vacationing together on Fire Island, Leo learns that Toby only pursued him because of his resemblance to Adam, although Toby insists he has since grown to love Leo for who he is. The two attend Toby’s play’s opening on Broadway, but Toby finally admits to himself that the story he wrote, allegedly based on his own life, is fake and not a true representation of his life.

Eric and Henry get married in a small ceremony, but Toby and Leo crash the party. Toby, under the influence of cocaine, begs Eric not to marry Henry, yet Eric tells Toby he no longer loves him. Leo and Henry also recognize each other at the wedding: Henry is a regular client of Leo’s, and they had sex during Henry’s relationship with Eric.

Leo dreams of Morgan, and tells him that although he has feelings for Toby, he knows the relationship is doomed due to Toby’s harmful behavior. Morgan tells him how all love stories are doomed by either tragedy or death, and how important it was for his book “Maurice” to have a happy ending for its same-sex couple. When Leo wakes up, he finds that Toby has left him. Eric realizes that he too is alone: All of his friends have left him, Henry is usually away for business, and their sex life is nonexistent due to Henry’s trauma regarding sex during the AIDS epidemic.

When Leo learns he is HIV positive, he goes to Toby’s apartment for comfort. So does Eric, who wants to apologize for what he said to Toby at the wedding. The two bond over their strained relationships with Toby. Leo, who has grown increasingly ill, encounters Adam and asks him to contact Eric. Adam drives Leo to Henry’s house, where Eric and Adam share a tender moment celebrating their old friendship before parting ways.

Eric decides to take care of Leo, just as Walter took care of other sick gay men during the AIDS crisis. Henry is angry about this, still traumatized by the death he saw during the epidemic, and makes Eric choose between him and taking care of Leo. Eric chooses the latter.

Toby travels to the town he grew up in in Alabama, where he reflects on his father’s suicide, his mother’s alcoholism, his childhood bullying, and living in poverty with his religious grandmother. He writes a new play based on his real-life background, unlike his other play, which was based on an idealized version of himself. When his agent refuses to publish the play, Toby fires him and sends the play to everyone he knows, including Eric. Eric, worried about Toby’s mental state, replies and asks him to visit Walter’s house, but Leo attacks Toby upon seeing him. That night, Toby decides he can’t live with his failures and kills himself by driving his car into a concrete wall.

At Toby’s funeral Henry tries to rekindle his relationship with Eric, but Eric tells him that he’d rather help those suffering than try to avoid the pain like Henry does. When Eric asks if he can own Walter’s house since Henry has no use for it, Henry finally confesses that Walter wanted the house to go to Eric.

Eric nurses Leo back to health and the two move on in life. The writers reveal that Eric goes on to live a long and happy life, serving as a mentor to generations of other gay men. Leo is revealed to have become the successful author of The Inheritance and remained close friends with Eric before passing away in Walter’s house, holding Eric’s hand.

In the epilogue, Leo, Henry, and Eric celebrate Eric’s 40th birthday at Walter’s house. Henry stands outside the home and has an epiphany, realizing the significance of the house for him, his family, and friends. Walter’s spirit finally appears before Henry, and the two kiss before the curtain closes.

Thinking Inside The Box

How do you prepare the set for a show that changes location nearly every other scene? Instead of creating multiple...

Looking Back: The AIDS Crisis in Rhode Island

Featured photo caption: Select panels from the Memorial AIDS Quilt of Rhode Island on display at Trinity Rep in December...

How “Howards End” Inspired “The Inheritance”

The Inheritance is inspired by Howards End, a 1910 novel by E.M. Forster. But what is Howard’s End, and how...

THE INHERITANCE, PART ONE, POST-SHOW CONVERSATIONS

Virtual: Saturday, November 5 at 4:00 pm via Zoom. Click here to join at that time.