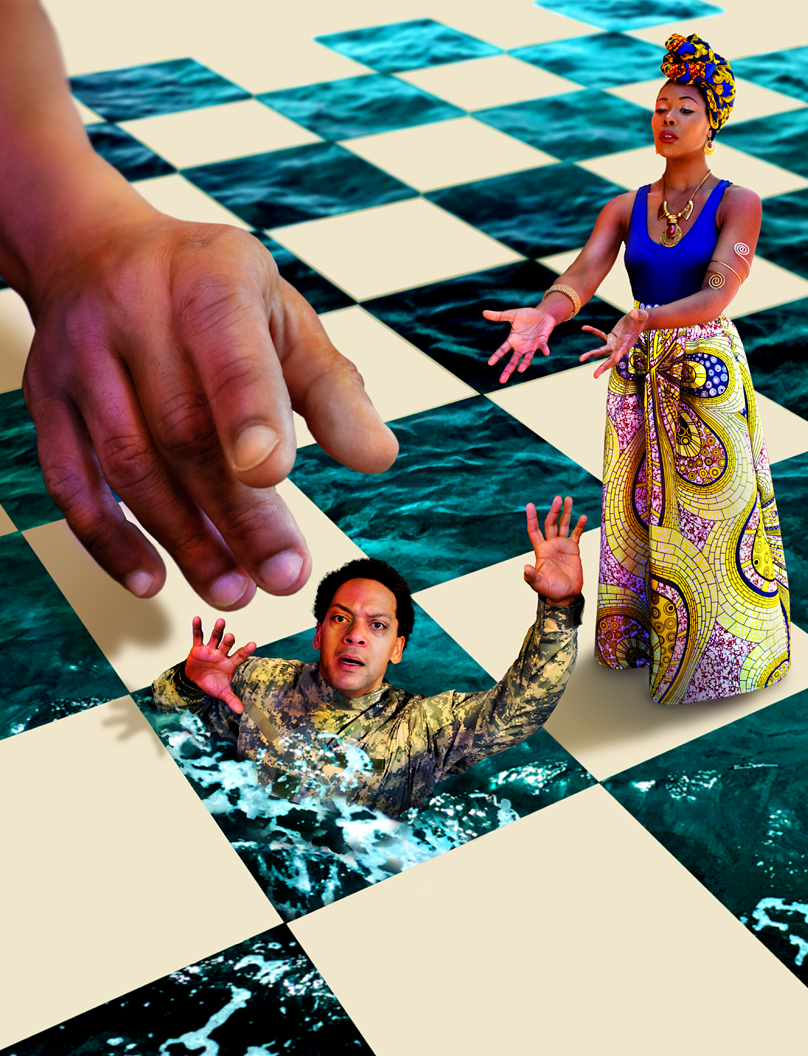 “You are lost in your blood, Ulysses. Lost in your history. The only way home is to traverse through your blood until you find your heart.”

One man’s journey home from war leads him on an adventure connecting him with his own ancestors and our shared humanity, before finally delivering him back to his wife and son. Throughout his epic voyage, Ulysses Lincoln’s fate is controlled by a host of gods including the dignified Deus, scheming Paw Sidin, and radiant Aunt Tina. This breathtaking, vibrant, and gloriously theatrical production is a lyrical, musical, and spiritual celebration of storytelling and what it means to find home.

Buzz
"Indeed, the entire cast of 'black odyssey' is first rate. The play has much to say and says it well. It’s an important piece."
Bill Gale, RIPR
"Black Odyssey is a story that needs to be told, told as only theater can tell it, with a powerhouse cast and creative team. Not to be missed!"
Rebecca Maxfield, Motif Magazine
"Do not miss the opportunity to see this play."
Nancy Burns-Fusaro, Westerly Sun
"(Playwright Marcus) Gardley’s vision — told through drama, dance and song — is a potent combination of classical Greek literature and American history, a heady and heartfelt mix of hope and rage that cuts to the chase of humanity and pierces the human heart."
David Christner, NewportRI.com
"... truly epic theatre at its finest."
Don Fowler, Warwick Beacon
"If you see one show this year, let it be "Black Odyssey." Because you'll see yourself in its characters, your life in its journey, and your family in its message."
Will Demers, EDGE Media Network
Prev2019 JanNext
Prev2019 FebNext
Prev2019 MarNext
Prev2019 AprNext
Prev2019 MayNext
Prev2019 JunNext
Prev2019 JulNext
Prev2019 AugNext
Spoiler Alert!

Ulysses Lincoln wants a better life for his family. He loves his wife, Nella Pell, and their unborn child so he decides to join the navy to help provide a better life for them. He is almost immediately deployed to Afghanistan and during the Gulf War he shoots and kills a son of Great Grand Paw Sidin, the God of Sea and King of Fish. Paw Sidin is furious at this loss and tries to attack Ulysses and kill him by drowning him when Great Grand Daddy Deus (God of Gods, God of the Sky), steps in based on the plea of his daughter and Goddess, Aunt Tina.

The two gods start a game of chess to battle for the life of Ulysses. This epic chess battle rips Ulysses from the fabric of time and sends him spiraling into the past to confront just exactly who he is, all while leaving the present – and his family – behind. Nella Pell is told that Ulysses is dead, but she refuses to believe it. With Paw Sidin constantly trying to trick her into giving up on Ulysses or to stop caring for him, Nella Pell has it rough. She stands strong, and her love for her husband does not waiver. Out of care for Ulysses, Aunt Tina comes to the mortal world to aid Nella Pell in raising her and Ulysses’ child, Malachi. Before they know it, thirteen years have passed and Nella Pell still has not given up hope that Ulysses will return.

Meanwhile, Ulysses is stuck as a pawn in the game of chess. He finds himself in many different places throughout time, including slave quarters, and eventually, he is stuck on the roof of a house that has flooded in the 1960s with a family of a mother, father, and daughter – all who cannot swim. There is no hope in sight for rescue and Ulysses begins to reflect upon his journey and what has happened. He thinks on his love for Nella Pell and his son that he has yet to meet when he decides to swim for it, accompanied by Benevolence, the child on the roof of the house he’s on. He tells her about the war that he was in and Benevolence listens intently. Ulysses suddenly realizes he must confront the one thing that he has been avoiding, the death of the man that he killed in Afghanistan. He asserts that it was an accident and that he was threatened by the person that he killed. Paw Sidin is furious that he is losing the game of chess against Deus and that Ulysses keeps escaping death, so he decides to go to the mortal world to try and intervene.

Nella Pell begins to doubt herself when Malachi begins acting out. She believes that if he had just had a father, he would not be behaving the way that he is. She begins to date a suitor named Johnny, who is actually Paw Sidin in disguise, and he tries to convince her that they should wed – and the faster the better. Aunt Tina (now going by Aunt Tee) tries to interject but being in mortal form for so long is killing her. Her mortal body gives up and she dies, leaving Nella Pell, Malachi, and Ulysses alone.

Ulysses and Benevolence are confronted by a police officer about who they are and Ulysses tries to explain that he is trying to save the little girl from the flooding. Benevolence explains that the officer cannot see her, but reveals who she truly is to Ulysses – his own mother who died in childbirth. She guides him back toward the present and Ulysses is thrown in jail.

At the same time, Ulysses’ son Malachi finds himself in a situation when he is confronted by the police, too. He is arrested and stuck in a jail cell – the exact same one that his father is in. Ulysses and Malachi sit side-by-side when a police officer explains to Ulysses that the kid next to him is, in fact, his son. The officer takes off his hat to reveal that he is Paw Sidin. Angry that he was going to lose the game of chess – which would allow Ulysses to live – Paw Sidin explains that he will keep his son in jail and that he will be marrying Nella Pell that upcoming weekend, ruining both of their lives. Paw Sidin explains that this is all because of the death of his son in Afghanistan, and Ulysses breaks down and admits that the killing was all his fault and that he had murdered Paw Sidin’s son out of fear.

Ulysses is suddenly left to face the God and find his family without the protection of Deus or Aunt Tina. Ulysses must face his truth. Will that be enough to satisfy the God and help Ulysses get back to his family?

The Costumes & Characters of “black odyssey”

12/13/18 by Maxwell Snyder Now that black odyssey rehearsals are in full swing, what better way to get ready than...

12/7/18 Maxwell Snyder, our Marketing Intern, joined the cast and crew of black odyssey for their first rehearsal on Tuesday,...